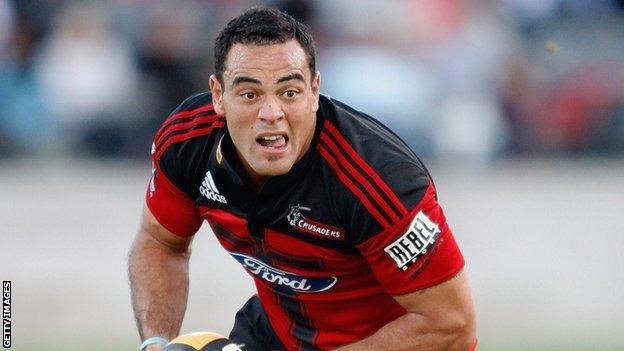 Scrum-half Kahn Fotuali'i will join Northampton Saints in the summer after rejecting a new deal at Ospreys.

The 30-year-old, who has made 39 regional appearances in two years at the Liberty Stadium, was set to be out of contract at the end of this season.

Saints director of rugby Jim Mallinder said: "Kahn is a player who has attracted a lot of positive headlines and attention throughout his career.

It's a statement of real intent from Northampton Saints.

Fans were hoping that new signings at the Gardens would give them something to cheer about with their European campaign over and Premiership form inconsistent - and it has.

"He has a superb set of skills and is a powerful and dynamic runner."

He added: "We're delighted that he has chosen to sign a long-term contract to play his rugby at Franklin's Gardens, and we're looking forward to welcoming him to the club in the summer."

New Zealand-born Fotuali'i, who has won 13 caps for Samoa, was part of the Ospreys side that won last season's RaboDirect Pro 12.

He joined the Welsh region from Super Rugby outfit Crusaders, for whom he played 28 times, and has also appaeared at fly-half.

"We made what we consider a very competitive offer to the player to retain his services, but unfortunately, he has advised us that his future lies elsewhere."

He added: "When Kahn signed for us it was pretty much under the radar and he has thrived in our environment, playing the best rugby of his career this season which has led to the intense interest in his services.

"Kahn was happy to stay here, but we were unable to match the salary available elsewhere, and we totally understand that it is only a short career and he needs to put his and his family's future first.

"Although this is disappointing news, the early decision from Kahn allows us to move forward positively as a business with an eye on next season and possible player recruitment.

"We will continue to look for under-the-radar signings who will offer value for money while contributing immensely to our environment, just as Kahn has."

Fotuali'i is Saints' second marquee signing in January, having announced they will also at the end of the season.