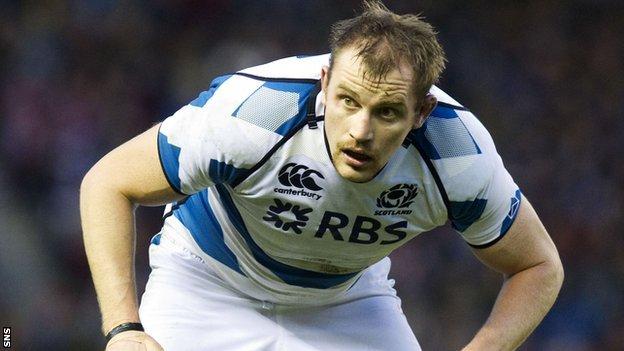 Scotland lock Alastair Kellock says it would "unbelievable" if the side could end their 30-year wait for a victory at Twickenham next month.

"It is a huge game," said Kellock. "They are all special games but to win one down there would put you in among the legends of Scottish rugby.

"If we win, it gets us off to a fantastic start in the competition."

It's key to get a bit of momentum at the beginning

Kellock has been on the winning side against England at Murrayfield twice since making his international debut in 2004 and is now one of the more experienced members of the squad.

"I'd love it [if Scotland won]," he said. "I've been lucky enough to play England a few times - beaten them up here, drawn with them up here and pushed them close down there.

"We had a disappointing result [against England] in Auckland in the World Cup when we were fantastic for 70 minutes but they scored a breakaway at the end.

"The first game of the Six Nations is always massive, so why not have it at Twickenham?

"It's key to get a bit of momentum at the beginning."

"Rugby is rugby, after all," he explained. "But he has got his own ideas and Dean Ryan has also come in with a few different things as well.

"It's about making improvements. They have done their analysis on the way we play and they have said that we can change things subtly to make us better."