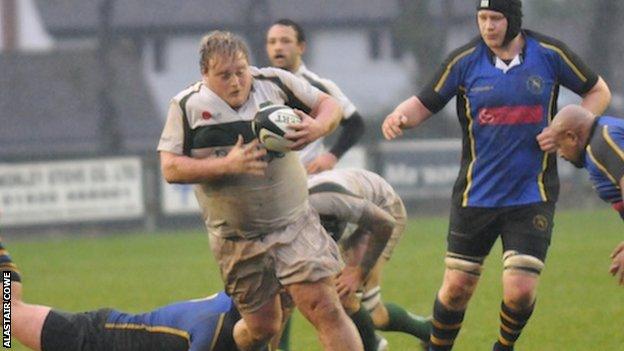 Guernsey boss Jordan Reynolds hopes his side will not repeat October's when the two sides meet at Footes Lane.

Eighth-placed Guernsey are three places and 12 points behind their opponents and Reynolds has a side which is much stronger than the one which travelled to Kent last autumn.

"Last time we played we had copious amounts of guys out," Reynolds said.

"This time around we've got a lot of those guys back which is brilliant."

Centres Chris Wood and James Marwick are unavailable for the game, so Luke Sayer will come in, while Simon Sharrott is back and Jason Batiste could feature.

"We want to try and find a little bit of form," Reynolds told BBC Guernsey.

"The squad is looking OK, a few guys are out, but at the same time we've got quite a strong forward pack so it's a bit of a bonus."

Guernsey and Reynolds says his side have been looking at what went wrong and how they can improve.

"After losing to Tring we've asked ourselves exactly what we want to produce this weekend and from here on in.

"There is a confidence running through the guys, but it's one thing to say you're confident, but you've got to progress and earn respect every time you go out and play.

"We've got to really find our form as early as possible."