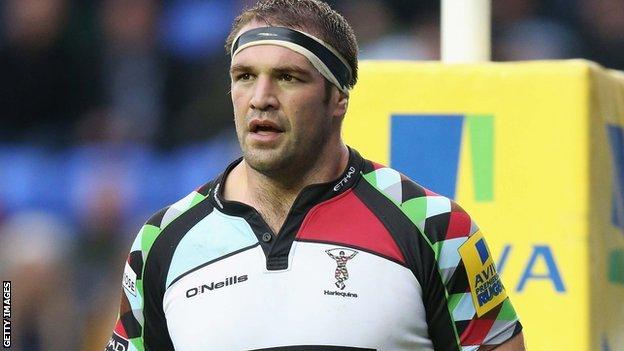 Kohn, 31, comes in ahead of the Grand Slam holders' opener against Ireland on Saturday, 2 February at the Millennium Stadium.

BBC Sport Wales revealed - via a grandparent - earlier this month.

"Receiving the call up was surreal and I can't wait to join up with the squad this weekend," said Kohn.

"It's a really proud moment for me and a great opportunity to show what I can do.

"Firstly, I am very surprised by his call-up because I didn't realise Olly had any Welsh heritage at all. I played with and against Olly during my time at Bristol and he never let on to me that he was Welsh. He will certainly offer the Welsh squad something different, he is a big man and... a workhorse, if you like. He would be the first to admit he wouldn't be the most natural line-out jumper. He jumps at the front, but he is a big man and adds weight to the pack and he can carry ball."

"It will be good to meet the squad, get training and hopefully be part of a successful Six Nations campaign with Wales."

Bristol-born Kohn, 6ft 7in and 21st 10lb, played his part in Harlequins winning the 2011-12 Aviva Premiership and they are in this season's Heineken Cup quarter-finals.

Howley said: "We looked at Olly when we initially selected the Six Nations squad and we have brought him in now as we believe he will be an experienced addition.

"He has been performing very well for Quins and has been a feature in their pack.

"He's a strong ball carrier and dominant at the set piece and it will be good to see him in the international environment."

Osprey Jones is expected to return from a shoulder injury during the tournament.

Wales hope Evans (knee) will be fit to face Ireland, but Charteris (knee) and Davies (ankle) will play no part in it.

Along with Evans and Jones Kohn will compete for a starting placed against Lou Reed (Cardiff Blues) James King (Ospreys) and Andrew Coombs (Dragons) as well as versatile back-row forward Ryan Jones (Ospreys).