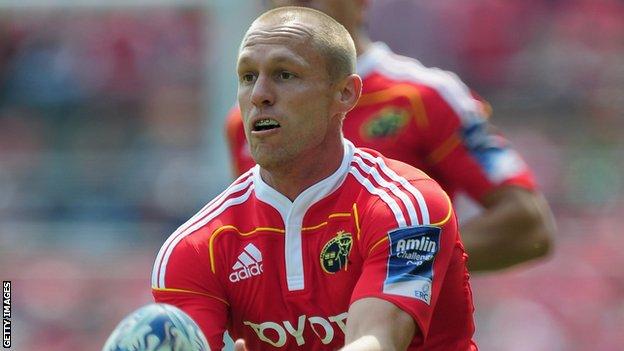 The 32-year-old won the Heineken Cup in 2008 and the Celtic League twice in a four-year spell at Munster.

Australian Warwick, who has twice played for the Barbarians, moved to Stade Francais in 2011, but has now agreed a move to England for 2013-2014.

Meanwhile scrum-half Jonny Arr, who came through the Warriors youth ranks, has signed a new contract at Sixways.

"He is technically very good in terms of his passing, kicking and defence. He plays a quick game which suits our attacking game."

Hill, meanwhile labelled Warwick as "a winner, very serious about his rugby and very competitive".

He added: "His attitude is absolutely spot on for the culture we are developing at Sixways.

"I want players here with a winning mentality. That's not just a phrase you throw about; you have got to do something about it to achieve it.

"Paul wants to win rugby matches and that mentality and professionalism is massive."

Warwick becomes the second player to agree a move from France to Sixways next season in the last week, after Toulon's Argentina international Leonardo Senatore joined on Wednesday.