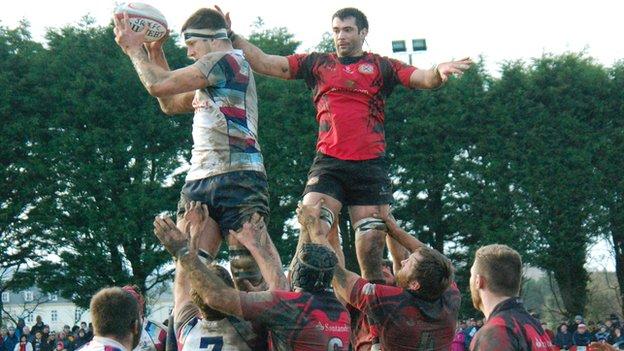 Jersey clinched a vital 13-10 win over Rotherham Titans after the Championship clash was switched to a training pitch.

The main pitch at St Peter was deemed unplayable after heavy rain in the island overnight.

Despite intense pressure from Rotherham just before half-time, it was 3-3 at the break.

Jersey came out brighter though and Guy Thompson's try put them ahead before Charlie Mulchrone's well-worked touchdown set up a thrilling finale.

Everyone in the island understood how important that game was

Neither side had threatened much early on in difficult conditions and there was little sign of the excitement which was to follow.

Michael Le Bourgeois's penalty opened the scoring for the relegation-threatened islanders after 18 minutes but Garry Law struck back with one of his own to level the score.

Then came the key passage of play just before the break. With Rotherham camped on the try line and Jersey being penalised over and over again it looked likely that the visitors would grab a try and lead at half-time.

But despite Jersey prop Jon Brennan being shown yellow, the 14 men kept their concentration to ensure it remained 3-3.

After half-time, and still a man down, Jersey took the lead when Thompson was bundled over the line.

A further Le Bourgeois penalty extended the advantage, but then came Mulchrone's try after a cleverly worked line-out to reduce the deficit to three points.

Deep into stoppage-time Jersey winger Ashley Maggs, who had been sin-binned, appeared to be dragged back off the pitch after a scuffle involving other players saw two further yellows brandished by referee Steve Lee.

The Yorkshire side had been on the attack at that point, but after a long discussion with the touch-judge the referee pulled play back to the halfway line and the threat was over.

"I thought that was a fantastic team effort, the defence you saw today was absolutely fantastic.

Jersey's win puts them six points above bottom club Doncaster but the islanders have played a game more.

Rotherham take a losing bonus-point away from their trip to the Channel Islands and remain in mid table.

"We had a couple of key moments on their line which we didn't capitalise on.

"At times we probably weren't clinical enough at the break-down in the first half and that stopped us."