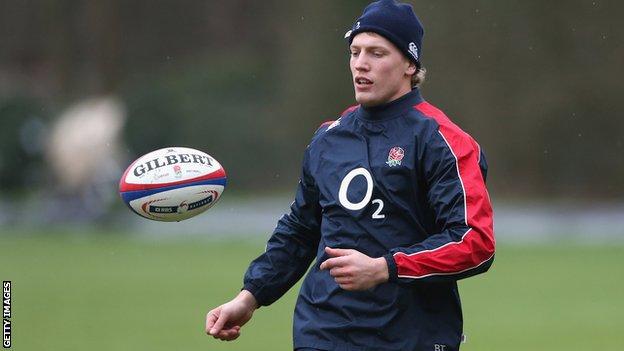 The only other change from the starting XV that beat New Zealand 38-21 in December is Joe Marler in for Alex Corbisiero at loose-head prop.

Tom Youngs retains his place at hooker ahead of Dylan Hartley.

Leicester's Youngs, who wins his fifth cap, replaced Northampton's injured Hartley for the autumn internationals, which culminated in England's stunning defeat of the world champions.

Twelvetrees is not a like-for-like replacement for Tuilagi but he has a more rounded game than the Leicester man, offering a kicking game and a presence as a second playmaker outside Owen Farrell.

"We are happy to stick with the team that did so well against New Zealand, especially in light of the fact that they have all been in good form for their clubs since then," said England head coach Stuart Lancaster.

"There were some very tight calls, with some experienced players coming back into contention, and I am sure the bench will have a significant impact on the game.

"We can't wait to get back to Twickenham and hopefully experience the same atmosphere as the autumn when the crowd was superb.

"It means a lot to the players to have such support in the ground and watching on television."

Twelvetrees joined the Leicester academy in 2007 and made his first appearance for the Tigers in 2009, scoring a try in a 14-point haul.

He was called up by the England Saxons in 2011 and moved to Gloucester at the end of last season.

Scotland are seeking their first victory at Twickenham since 1983.