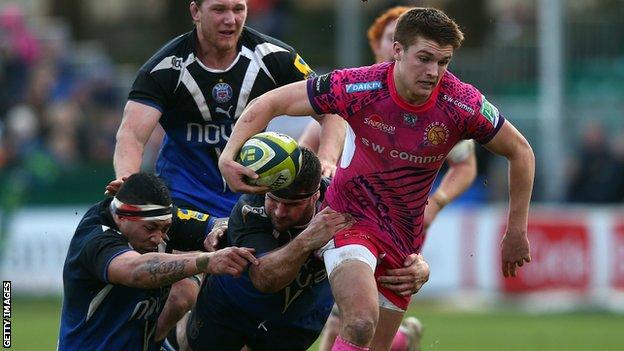 Exeter coach Ricky Pellow says he is frustrated that his side did not take their chances in their 16-6 loss at Bath in the LV= Cup.

Ex-Ireland scrum-half Peter Stringer's two second-half tries sealed the win for Bath, who are still the only top-flight side never to lose to Exeter.

"It's frustrating, but the most pleasing thing is we created those chances," Pellow told BBC Radio Devon.

"We now have to go away and look at how we're going to finish them."

Exeter went in level at 6-6 at half-time after two penalties from England Under-20 international Henry Slade cancelled out two from Tom Heathcote.

But Stringer's arrival just before the break changed the game and he scored twice in four second-half minutes to seal the win against a much-changed Exeter line-up.

"We feel that we're moving forward with our attack each week," Pellow added.

"Bath controlled the momentum just after half-time, got into scoring positions and took their chances."