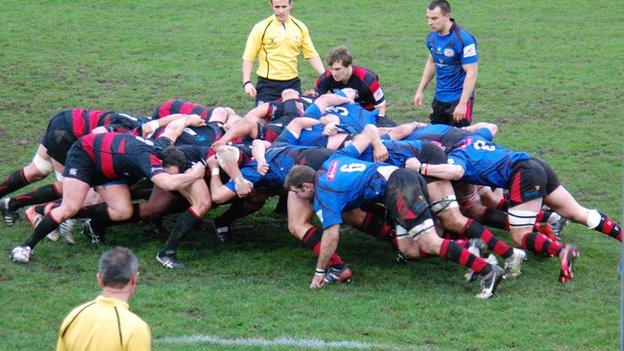 Thompson scored Jersey's only try in the win, which moves them six points clear of bottom club Doncaster.

"We're trying to get that team spirit back and that hard work that won us the league last year," Thompson said.

"We're now thriving on that and looking to push on now and continue from this performance," he told BBC Radio Jersey.

Thompson was pushed over the try-line by his pack in the second half to put Jersey clear and set up their fourth win of the campaign.

"If ever there was a try that was team work then that was it, everyone put everything in, we fought for everything.

"The last couple of weeks in training have been hard, we've been fighting each other, doing contact and the basics again.

"When we've got a forward pack and a tight five like we've got, we're not going to fear anybody.

"That last five minutes when they threw everything at us just shows the hard work that we've put in during the past couple of weeks in training.

"We're ready to step up, we don't want to be in a relegation battle, we want to be in mid-table pushing up, looking to lay foundations this year and we're really going to attack next season as well," he added.