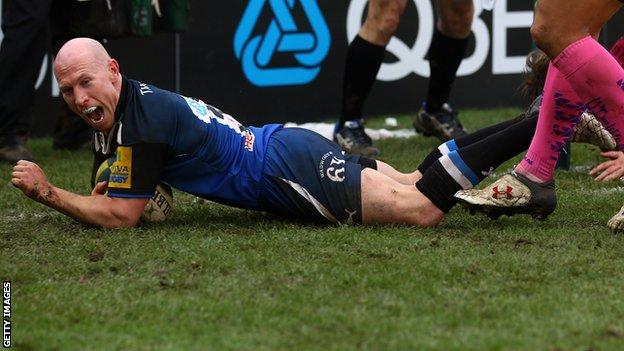 Bath scrum-half Peter Stringer has said he is thankful to be playing first-team rugby again after a "frustrating" time with Munster.

The 35-year-old, who has been capped 98 times for Ireland, arrived at the Rec on a short-term loan deal last week.

He went on to score two tries on his debut in their 16-6 win over Exeter in the LV= Cup on Saturday.

"I'm really grateful to them for giving me the opportunity to play," he told BBC Radio Bristol.

"It's been very frustrating [at Munster]. I still have an ambition and drive to play at the highest level. That's why I looked to move away and thankfully Bath gave me an opportunity."

Stringer, Ireland's most capped scrum-half, has made 230 appearance in 15 years at Munster but had played just nine times this season before making his move to the Premiership.

The former Saracens and Newcastle loanee continued: "I was looking for a loan as I haven't had an opportunity to play.

"When you're doing all the training like I was at Munster and not getting an opportunity to step on the pitch at the end of the week.

"The first few days [at Bath] were a bit of a struggle but as a player when you step foot on the field your instinct takes over.

"I was glad to get a run and a decent bit of game time on the pitch. Thankfully I was able to play a part in the victory."