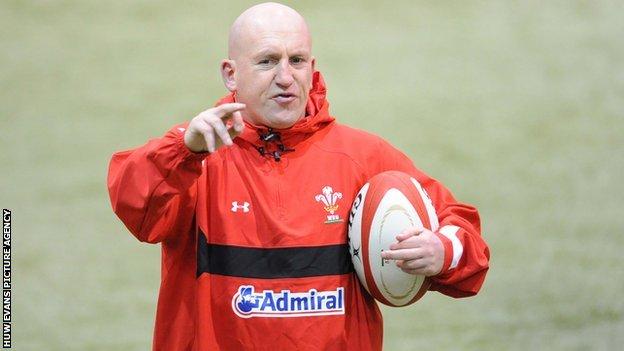 Shaun Edwards says his loyalty to Wales and Warren Gatland is not in question after missing out on the British and Irish Lions tour to Australia.

But he said: "There is no way my loyalty will be questioned."

I am not going to forget what Warren Gatland has done for me over the last ten years.

Gatland is absent for Wales' Six Nations campaign due to his role as British and Irish Lions head coach, while Rob Howley continues as interim Wales coach for the tournament.

Edwards was seen by many as a favourite to fill the Lions defence coaching role for the three-Test series against the Wallabies after Wales' Grand Slam success in the 2012 Six Nations.

The former Great Britain rugby league international was part of the coaching team that guided Wales to the semi-finals of the 2011 World Cup.

But Gatland appointed Farrell, who was part of the England coaching set-up which beat New Zealand 38-21 at Twickenham in the autumn, to the post.

Farrell, a former rugby league team-mate of Edwards at Wigan, will be joined by Howley, as attack coach, and forwards coach Graham Rowntree in Gatland's Lions backroom team.

"Obviously, everybody wants to go on a Lion tours, as a player and as a coach," said Edwards.

"But the decision has been made. Gats has made his decision and obviously I am abiding by it.

"I am not going to forget what Warren Gatland has done for me over the last 10 years.

"Most of the things I have achieved as a coach, have been through him and through his help.

"He has been a great mentor for me and hopefully, he will continue to be that in the future.

"He has made a decision that went against me, but as I have said there is no way my loyalty will be questioned."

Edwards quit his consultancy role at London Irish in January to concentrate on his duties with the Wales national team.

While the Lions are in Australia, Edwards will assist caretaker coach Robin McBryde on Wales' tour to Japan.

Wales play Japan on 8 June in Osaka and then 15 June in Tokyo, while the Lions tour to Australia, via an opening game against the Barbarians in Hong Kong, is from 1 June-6 July.