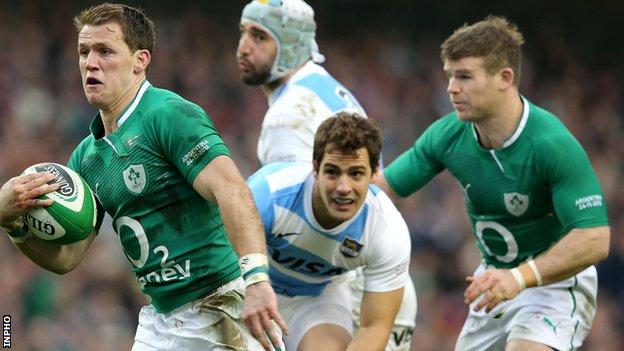 Ulster winger Craig Gilroy will make his first Six Nations start for Ireland in Saturday's opening game of the 2013 tournament against Wales in Cardiff.

The 21-year-old won his first cap in the November win over Argentina.

Leinster's Sean O'Brien is back at flanker so Chris Henry is named on the bench despite recent impressive form.

Full-back Rob Kearney returns after missing the autumn internationals and Brian O'Driscoll is restored to centre for what could be his last Six Nations.

Ireland coach Declan Kidney has named Munster's Simon Zebo on the left wing, so Gilroy moves to the right in place of the injured Tommy Bowe.

Exciting prospect Gilroy scored a try when he won his first Ireland cap in the important autumn Test win over Argentina.

Earlier in the year the Belfast-born 21-year-old played in non-capped matches against the Barbarians and Fiji.

Gilroy's impressive performance against Argentina seems to have sealed his place in the Ireland squad at the expense of Ulster team-mate Andrew Trimble, who is one short of his 50th international cap.

O'Driscoll, after being replaced as captain by Jamie Heaslip, will partner his Leinster team-mate Gordon D'Arcy at centre for a record 48th time.

Rob Kearney forms an exciting back three with Gilroy and Zebo with Keith Earls having to be content with a place on the bench.

"It was a tight call because there's so much competition. Fergus McFadden and Keith Earls have been playing well, so it's testament to the way Craig and Simon have been playing that they're selected," said Kidney.

The Ireland coach acknowledged that in-form Henry was unlucky to miss out on the open-side flanker spot with fit-again O'Brien instead starting at number seven and Munster's Peter O'Mahony given the number six shirt.

O'Mahony's selection came shortly before the announcement that he had signed a contract extension with Munster which will keep him with the Irish province until the summer of 2015.

There had been speculation that O'Brien might have been switched to number six which would have allowed Henry, impressive against Argentina in November, to have remained at open-side.

"We felt that in terms of a mix in the back row this was the best combination, but there was certainly plenty to talk about following Chris' performances in the autumn," Kidney added.

Ireland will fancy their chances of getting their Six Nations campaign off on the right foot by beating a Welsh side which has lost seven Test matches in a row.