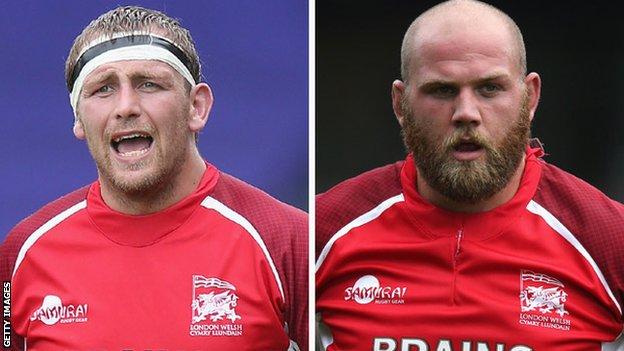 Mills joined the Exiles in 2007 from Scarlets and led the side in their Championship play-off victory.

The 28-year-old, who is the club's longest serving player, agreed a new deal in July and retained the captaincy for their maiden Premiership campaign.

Frenchman Joly, 21, arrived from Bourgoin in the summer and has featured 12 times this season.

London Welsh head coach Lyn Jones said: "Jonathan has stepped up to Premiership level and has performed to a consistent standard. He has led by example as captain and has shown that when he's on the field he's a true Premiership player.

"Arthur has proved himself to be a very popular member of the squad, impressing all when he's played.

"He's still a young French prop who has a huge amount to learn about the game, but he's got the basics in place and he's going to prove a very good signing for London Welsh."

With the Exiles currently lying 10th in the Premiership, 10 points above bottom side Sale, they have already begun planning for next season with winger Nick Scott and prop Franck Montanella signing new deals and Argentina centre Gonzalo Tiesi signing for the club.