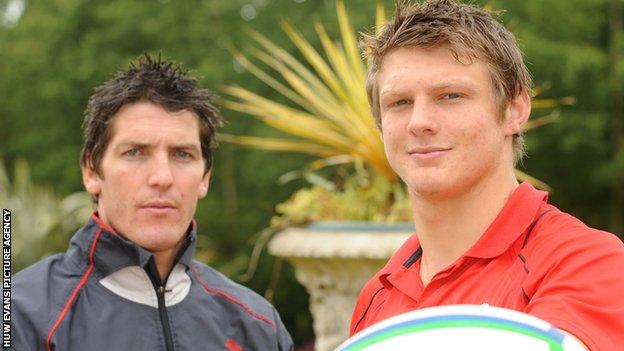 The Wales camp admit they face a tough choice at fly-half for Saturday's Six Nations opener against Ireland at the Millennium Stadium.

With Rhys Priestland out for the season it is a straight fight at number 10 between Osprey Dan Biggar and Perpignan's James Hook.

Wales attack coach Mark Jones revealed it has been tough to split the two ahead of Thursday's team announcement.

"It's fiercely contested at the moment," said Jones.

"It will be a difficult one. I know that the coaches are mulling it over and reviewing training quite a bit.

"[It's about] trying to select with Ireland in mind as well as our own style of play as well.

"Both players are doing well. Dan had the extra week by Hooky being out in France, but of course Hooky had a game.

"It will go right down to the wire, I'm sure, for Rob [Wales interim head coach Howley]. I'm glad he is making the decision not me."

In the autumn series Priestland started three of the four matches, with 27-year-old Hook coming on for the final 12 minutes against New Zealand.

Biggar, 23, started against Samoa but injured his shoulder after only 38 minutes and was replaced by Priestland.

Priestland ruptured his Achilles tendon in the Scarlets' Heineken Cup defeat at Exeter in December to create a straight fight between Biggar and Hook for the coveted fly-half jersey.

The choice at outside-half could come down to which player is more likely to create try-scoring chances.

That was a problem for Wales during the autumn series when they only managed three tries during their four defeats.

"There was no doubt the boys [didn't attack] as they would have liked in the autumn. I don't think there is any hiding place from that," admitted Jones.

"But previous to that Wales have played some great rugby. It's definitely something Rob is keen to return to… where we are challenging defences all the time.

"We have got some great options to be able to do that and there has been a focus on trying to get back to that attractive, effective style of rugby."