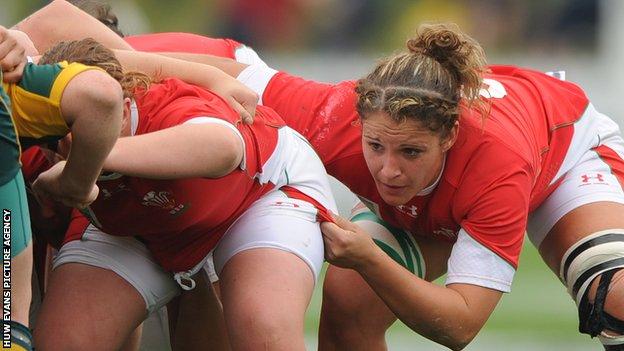 This season's Six Nations is a huge year for the Wales Women's team because they must finish in the top four in order to qualify automatically for the 2014 World Cup.

And the priority this season will be qualifying for that World Cup.

If they don't finish in the top four they would have to go through the European qualifying process, which is time consuming and costly.

It will be a tough campaign for Wales, who start against Ireland at Aberavon on Sunday.

Coach Rhys Edwards has named a very experienced side mixed with a few youngsters who have come through the system over the past few years.

I think the squad is looking stronger this year than it has for the last two seasons.

Wales have more strength in depth now than we've seen for a number of seasons and have really been focusing on fitness and conditioning with the squad looking fit and strong.

Wales have introduced a lot of youngsters over the past two seasons after a lot of players took some time out after the 2010 World Cup.

This season quite a few of those senior players have returned. Catrin Edwards, who captained the side a couple of years ago, is back and she will be a huge gain.

Gemma Hallett is back in the second-row with Catrina Nicholas returning to the back-row and Elinor Snowsill is back at fly-half.

Captain Rachel Taylor is a woman of few words who leads by example. She's grown this year playing for Bristol in the English Premiership, as has Snowsill, playing a very high standard of rugby week in week out.

I think playing against the top players will have improved Rachel. She's a great leader and I'm sure the team are pleased she's the captain for the second year running.

For the first time in a few years Wales actually had a warm-up game in preparation for the Six Nations, which was brilliant.

They played against Spain, who used to be a part of the Women's Six Nations until seven years ago and are a very strong nation. They're ranked second in the world in the Sevens so it was a good test for Wales, who won a very close game.

That will have given them confidence going into this first game against Ireland.

Ireland are a very tough nation and have done really well on the Sevens circuit this year and have got a great regional structure.

They have gone from strength to strength over the last few seasons and they are a big strong outfit. I think they may be dark horses for the championship this year.

That's because defending champions England have named a squad without 17 of their first choice players due to the Women's Sevens World Cup in Moscow later this year.

England have decided to prioritise the Sevens programme and win that World Cup and obviously Sevens for women and men will be in the Olympic Games in Rio in 2016.

The English will have an inexperienced squad this year for the first time ever so I think teams like Ireland and France will be targeting them and hoping to beat them and win the championship.

If you have any comments or questions for Non, please use the comments section below