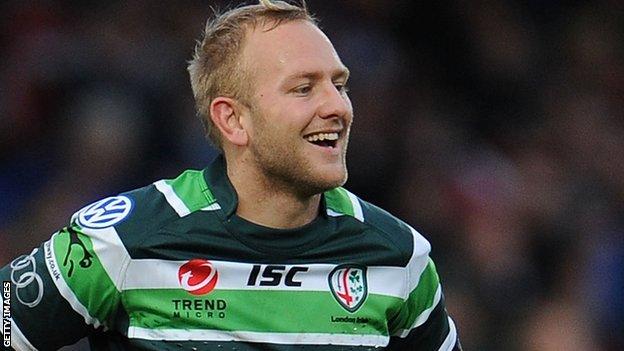 London Irish fly-half Shane Geraghty believes the club are finally beginning to find some form after their unbeaten start to 2013.

Irish sit second bottom in the Premiership, five points above Sale, but have won four games in January.

"There is a different feel to the club in what we're doing now. It's taken a lot of time to understand what we're trying to achieve."

Geraghty returned to the club where he started his career at the beginning of the season, after spells at Northampton and Brive.

His recent form has been praised by head coach Brian Smith, with the Australian believing he is a better player now than during his first stint.

With the club having won only three games in the league, the six-timed capped England international believes they are are now ready to take their recent run of wins into the Premiership.

"I think there were so many changes in the off season that it surprised a few people that we started so poorly," Geraghty told BBC Berkshire.

"Obviously it would take time to get together but I don't think many saw it taking this long.

"I think we're at a point now where we can see a bit of belief coming through and I think we're now more of a team than we were than in the early part of the season.

"That's come from working hard in training but also going through some tough places and having some tough losses in the first part of the season."