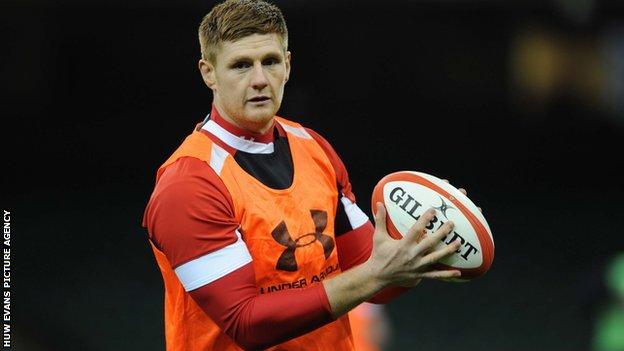 Andrew Coombs is the surprise new cap in the Wales side to face Ireland in Saturday's Six Nations opener at the Millennium Stadium.

The 28-year-old, who has switched from the back row for Newport Gwent Dragons this season, fills Wales' vacancy in the second row and partners Ian Evans.

Scarlet Aaron Shingler is at blind-side flanker, with Sam Warburton and Toby Faletau in the back row.

Evans will play his first game since he injured his knee playing for Wales in mid-November, but his fellow Osprey Ryan Jones misses out with a dislocated thumb.

Coombs, who stands at 6ft 4in, has played for Pontypool and Newport in the Premiership and was one of five uncapped players named in the Wales squad.

Locks Alun Wyn Jones, Luke Charteris and Bradley Davies are all out injured and Wales interim head coach Rob Howley has given Evans, who played every minute of last year's Grand Slam, every chance to prove his fitness.

Uncapped Harlequins lock Olly Kohn, 31, is on the bench having

That means no place for Osprey James King or Cardiff Blues' Lou Reed in the match squad.

With Dan Lydiate injured, Wales had hinted at playing both open-side flankers Warburton and Justin Tipuric at six and seven in the back row.

But with the raft of injuries at lock, playing 6ft 5in Scarlets flanker Shingler at blind-side provides another option for Wales at the line-out.

Biggar has held off the challenge of James Hook for a chance to make the number 10 shirt his own, with Rhys Priestland missing due to an Achilles tendon injury.

The Ospreys stand-off has been the form number 10 in regional rugby this season and is preferred to Perpignan play-maker Hook who is named on the bench.

Triple Grand Slam-winner Adam Jones returns at tight-head prop after missing Wales' winless autumn campaign with a knee injury and packs down in an all British and Irish Lions front row alongside Gethin Jenkins and Matthew Rees.

Wing Eli Walker had been tipped to win his first cap after an impressive start to the season but the Osprey has been struggling with a hamstring problem, so George North and Alex Cuthbert continue as Wales' giant wings.

156 comments
Back to top
unknown