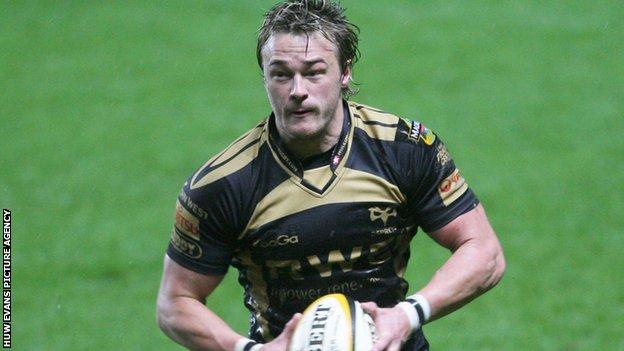 Scrum-half Liam Davies has signed with the Cardiff Blues until the end of the season.

The 27-year-old has been brought in as extra cover for Rob Lewis who has returned to London Welsh on loan.

"He will give us extra cover at scrum half for the rest of the season," said Phil Davies, the Cardiff Blues Director of Rugby.

The player made his Scarlets debut against the Cardiff Blues in September 2005 and went on to make 43 appearances for the West Wales region.

He then signed for French club Brive on a two-year contract in 2008 before moving back to the UK, having spells with the Ospreys, London Welsh, Scarlets and the Dragons.

Phil Davies, the Cardiff Blues Director of Rugby, welcomed a player he knows well to the Arms Park for the rest of the season

"Liam is a player that I am familiar with having coached him as a 19-year-old in the Scarlets.

"He is a very talented scrum half who has a great pass, a good kick and does the basics well.

"He played alongside Andy Goode in Brive and has come home looking for an opportunity to play.

"He will give us extra cover at scrum half for the rest of the season with Rob Lewis having returned to London Welsh on a loan spell."

Davies signed a three-year contract with the Ospreys in 2009 before he went on loan to London Welsh a year later and was released to join French club Dax.

He returned to the Scarlets as cover for injured scrum half Tavis Knoyle in 2012. He was then released from Parc Y Scarlets and joined Newport Gwent Dragons in 2012.