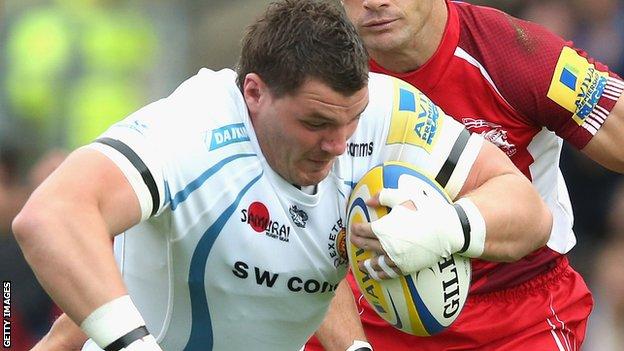 Phillips, who joined in 2010, has missed most of the season after suffering a knee injury in September.

They are the latest in a series of players to agree contract extensions at Exeter, the others including and and England flanker Tom Johnson has also indicated

Out of contract Exeter players who have signed new deals

Chiefs have also secured the services of while Fijian wide man after finally resolving work permit and visa problems.

"It's good that a lot of the boys are committing themselves to the club," said Moon.

"We've been through a lot over the years and hopefully we can achieve even more together over the next few years."

Moon has played 81 times for Exeter and has appeared in this season's Heineken Cup campaign, as well as the Premiership.

"He's learning right in the heat of the battle and playing sides like Clermont Auvergne and Leinster is fantastic for a young prop," said head coach Rob Baxter.

"We're seeing those gradual improvements that we've talked about, he's getting decent game time now and it's his game time that will see his development accelerate."

Phillips, meanwhile, was delighted to have been given another chance to prove himself after damaging knee ligaments in the loss at Saracens last September.

"It's a massive relief because you are never always sure where your next contract is coming from," he said.

"It's been another tough year for me - what with the injury - but I'm working hard to get back fit and once I've done that I want to repay the faith Rob has shown in me."

Baxter said Phillips was a popular member of the squad, who deserved a chance to show he is good enough.

"We think he can be an important part of where we're going moving forward," he added.

"He'll get a genuine crack at trying to start more Premiership games. The performance he was putting in against Saracens was holding him in good stead, he was doing what we wanted him to do which was carry hard and cross the gain line.

"I think we were really seeing that in his performance against Saracens when he had this injury."