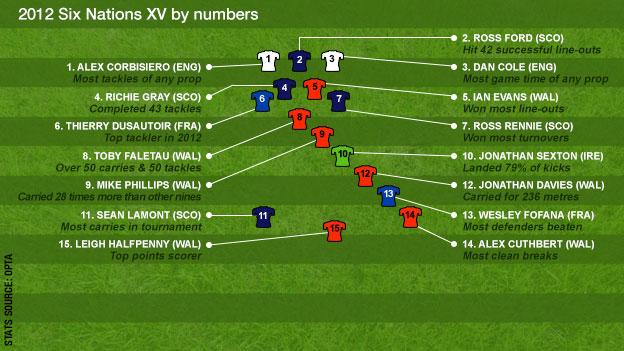 England v Scotland is the oldest international fixture in rugby union, stretching back to 1871, and one in which the form book can go out of the window.

England came second in the 2012 Championship, while Scotland ended with the Wooden Spoon.

But as the graphic above shows Scotland have some outstanding players, with four making the statistics-based best XV for 2012*, while only two Englishmen made the cut.

And Saturday's battle for the Calcutta Cup, first fought over in 1879, is likely to be as ferocious as any meeting of the two Auld Enemies over the past 134 years.

What does form tell us?

If you look at this game just based on their last two performances, with Scotland losing to Tonga while England secured a record win over world champions New Zealand, it seems like a foregone conclusion.

England boss Stuart Lancaster has been keen to lower expectation, pointing out that over the last four games home and away, the winning margin between the two sides has only averaged four points.

But Scotland have not won in London since 1983 and have lost their last three games at Twickenham by an average of 16 points.

Everyone will be telling England "this should be a comfortable win" but none of the Scottish boys are going to be thinking of either the history books or that victory over the All Blacks - they won't be intimidated.

I look at Scotland's front five, especially that second row of Richie Gray (see graphic at top) and Jim Hamilton, and that pairing is a match for anybody. The 6ft 8in Gray is enormous, in every sense, for the Scots.

Their back row is also built to have a real good crack at England - Alasdair Strokosch, Johnnie Beattie and Kelly Brown is a serious combination.

For England, flankers Chris Robshaw and Tom Wood are both workaholics and Ben Morgan is a bit of a wrecking ball, he's the pack's equivalent of the injured Manu Tuilagi.

Morgan is not as powerful and dynamic in defence as the others though and the Scottish three are going to go all day.

England were so explosive, dynamic and clinical at the breakdown against New Zealand. They won the contest at the ruck that day, but Scotland won't allow them the same luxury.

Even I wondered if Lancaster was going to pick the inexperienced Billy Twelvetrees but he's made a big call and handed the Gloucester inside centre his debut.

I think the tricky conditions they're expecting on Saturday may have played a part - big is beautiful in that situation and he's 6ft 3in and 16 or so stone.

Twelvetrees seems to have developed from a fairly gangly young man into Tarzan, and it's impressive. His move from Leicester to Gloucester, where he's teamed up well with Freddie Burns and learnt a lot off Mike Tindall, has certainly paid off.

The man nicknamed '36' is a good all-round footballer - his passing game is good and his kicking game is great - but he's in there to use his weight, size and speed, as well as his footballing skills.

He'll want to get hold of the ball and have a peg at Ruaridh Jackson and Matt Scott in the Scottish midfield.

I think a key game for him came against Leicester. Gloucester lost, but after the match England assistant coach Andy Farrell said Twelvetrees had put in a "monumental" performance in defence.

Before that game his tackling percentage was not even in the high 80s, whereas Brad Barritt's was much higher, but the Tigers game lifted him into the 90s (although it's subsequently fallen back to 87%).

The England selectors had been looking at his defence and he knew what he needed to do to impress them.

Does he have any weaknesses?

He's directly opposite Scott at inside centre and they're similar in size. Neither is quite world class yet in defence but both like to attack.

In the Pro12 Scott's made an impressive number of clean breaks and off-loads and has beaten plenty of defenders, given he's only played eight games compared to Twelvetrees' 13 - and Twelvetrees has played every minute of those matches.

The international game has moved from possession being the most important factor to territory being king in the modern game - the key with possession is where you have it, preferably in your opponent's 22.

This means the kicking game will be vital, especially if we get the conditions predicted, because it is a quick way of making ground.

At the same time though, you can be punished if you kick badly. Barritt's try against New Zealand came a couple of phases after a poor Dan Carter kick, and Ben Foden's try against France in last year's Six Nations came after Morgan ran a poor France kick back - kicking is only as good as the chasing.

You have got to execute your kicking strategy well and there's no doubt Twelvetrees adds to that for England, while Mike Brown is fantastic both in defence and attack in that area.

Who's going to win then?

England are clearly favourites but Scotland look a decent side.

Their back three of Stuart Hogg, Tim Visser and intriguing debutant Sean Maitland could be lethal and Sean Lamont, who had the most carries in the entire tournament in 2012 (see graphic at top), gives them plenty of experience.

The Scottish pack is incredibly strong and they will examine England thoroughly, but I expect the hosts to win by about nine points.

* How were the stats worked out? Each direct involvement - eg try, tackle, turnover etc - by a player was recorded and given a points value and weighted against various criteria including position on the pitch and score at the time.

All scores are then added up to give player a match score. Note that centres, flankers etc are considered interchangeable.

The players in the XV were the leading cumulative points scorers in their positions, the stat included on the graphic is their "high point".