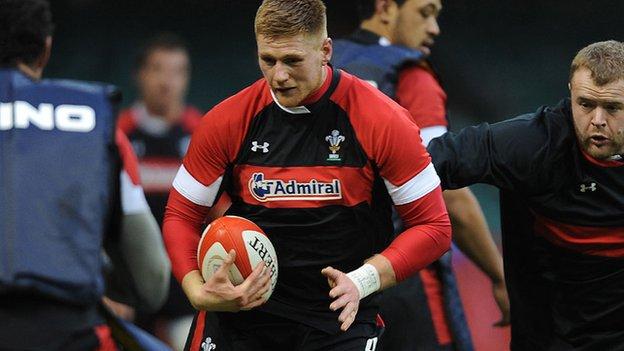 Uncapped Andrew Coombs admits he has been losing sleep since being named in the Wales squad for the Six Nations.

But the Newport Gwent Dragons second row will fulfil a dream when he makes his debut as Wales start their defence of the title against Ireland in Cardiff on Saturday.

"Emotions are running quite high," said the 28-year-old from Merthyr Tydfil.

"[I've been] nervous and excited, I haven't been sleeping much, but it's all good isn't it?"

The Dragons star has played the majority of his career as a blind-side flanker, but has recently concentrated on the second row.

Injury has restricted him to four Pro 12 league appearances for the Dragons this season, but a bigger injury crisis in the Wales second row has opened the door for Coombs.

Grand Slam-winners Bradley Davies, Luke Charteris and Alun Wyn Jones are all unavailable through injury, with Ryan Jones - who also provides cover - ruled out with a damaged thumb.

Coombs acknowledges that injuries have helped him break into the international ranks, but admits it was still a surprise when he received the call from Wales.

"It was a bit of a shock, but I've said previously I've been watching very closely," he said.

"Unfortunately people get injured, so I just thought if it comes, it comes - if it doesn't I just keep trying.

"I've been so excited since I had the call-up. I'm just really looking forward now to getting in the mix on Saturday."

His relative lack of experience at second row does not worry Coombs.

"I'm really confident at the moment. I've played most of the season there [second row] for the Dragons," he added.

"The coaches Rob Appleyard and Iestyn Thomas have been helping me a lot and [head coach] Darren Edwards too has been helping me with my general play around the park as a second row.

"It was a bit of a shock to the system at first, especially the scrummaging, if I'm honest.

"[I was] getting up from the scrums with my legs just burning after putting everything into it, but I'm a few games into it now so I'm getting used to it."

Wales go into the match with Ireland on the back of seven consecutive international defeats, including a whitewash in the autumn internationals.

However, Coombs does not believe that form will have any bearing on how Wales will play in the Six Nations.

"It does have an effect on the squad, but we've come in we've been really positive we've just got to try to forget about the autumn games.

"We're just trying to get our confidence back together now and we look forward to this Irish game."