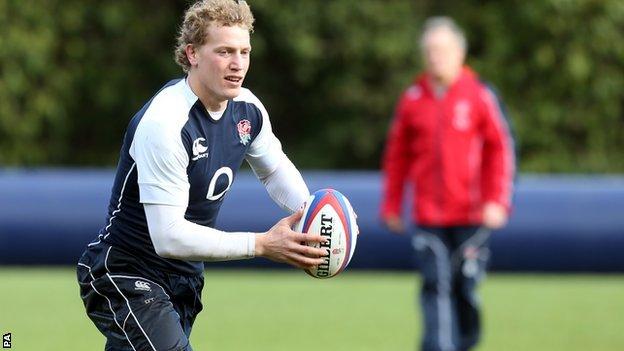 Billy Twelvetrees will be looking to England's heroes of the recent past for inspiration when he makes his international debut against Scotland this weekend.

The 24-year-old centre, picked in place of the injured Manu Tuilagi, plays alongside former national skipper Mike Tindall at Gloucester and grew up watching the World Cup winning team of 2003.

He said: "Jonny Wilkinson, Mike Catt, Will Greenwood - those were the sort of players I looked up to.

"Mike has given me the confidence to believe in what I do well. He's very good at bringing a calming influence, but he's a similar sort of player as me in terms of his physicality. He's always taking me to one side to nurture me."

While the absence of Tuilagi to an ankle injury is a blow to England - the 18-stone 21-year-old scored one try and made two others in last December's famous defeat of the All Blacks - the partnership of Owen Farrell at fly-half and Twelvetrees at inside-centre gives the side a different dimension.

With a strong kicking game, bruising defence and experience of playing 10, Twelvetrees has a depth to his game which should keep him in the reckoning even when Tuilagi returns, as he is expected to, against Ireland in Dublin on Sunday week.

"Owen and I are both very ambitious players," he said. "We want to control the game. We can kick and pass, but we both like getting our heads in the dark places too.

"We've been building on that relationship this week, having sit-downs and chats together. We want it to work perfectly for us. You have to understand your fly-half as well as the people outside you, and that will grow with me and Owen.

The former Leicester man insists the unique atmosphere of a Calcutta Cup match at Twickenham will not stifle the form that has made him one of the Premiership's stand-out 12s this season, with Catt - now the side's attack coach - there to guide him.

He said: "In a weird way, I've always enjoyed being nervous. I like looking forward to what might be, whether it was my Leicester debut or this.

"I see it as just playing rugby, just catching and passing and playing with your mates. Having a red rose on your chest is no different. You still play with the same passion and excitement. I've always enjoyed the bigger audience.

"You've got to relish it, or there is no point in doing this job. I play because I love it, and this is the biggest stage. I've always dreamed of it, and I can't wait to run out."

In the corresponding fixture a year ago, England coach Stuart Lancaster blooded seven new players. That Twelvetrees is the only debutant this time around does not mean the team is much more experienced.

Four players - loose-head Joe Marler, hooker Tom Youngs, lock Joe Launchbury and full-back Alex Goode - will be making their Six Nations bows, but Twelvetrees believes all are ready to impress in the fierce atmosphere of one of the game's great rivalries.

"Any player coming into any team has to think about themselves and what they can add. Otherwise there is no point in being there," he said.

"I want to take every chance I'm given. Whichever team I played in growing up, players often got their opportunity through injury. You have to make it your own.

"I have to impose myself and get my hands on the ball, otherwise there is no point in being there. I have to show everyone what I can do."

Twelvetrees's first Six Nations memory is England's defeat at Murrayfield in 2000, when a ferocious display by the underdogs denied Clive Woodward's men a Grand Slam.

"I was pretty devastated about it," he admits. "I recorded it, because I was playing that day, and watched it when I got home.

"I was absolutely gutted. And then a year later they lost against Wales at Wembley. I remember as a spectator being really frustrated. It made me want to play for England and win a Grand Slam."

The youngest of four brothers, Twelvetrees credits his move from Tigers to Gloucester for his development from the national second-string Saxons side into fully fledged international.

"Playing week in, week out in a very competitive Premiership would help anyone. For me, having partnerships with Freddie Burns, Mike Tindall and Henry Trinder really improves my game and gives me confidence in what I can do."

He first trained with Lancaster's squad as injury cover during the autumn internationals. But it was his inclusion in the elite player squad announced in January that gave him the confidence to believe he truly fitted in.

"It confirms that you're worthy, that you're one of the best in England. I was honoured, and it gave me the incentive - right, I've been named in the squad, now I've got to get into the team.

"Each training week is pretty short. You're not out there very long, so you have to take the opportunity to prove to the guys around you what you're good at."

Twelvetrees - famously nicknamed '36' by former Leicester team-mate Geordan Murphy, as in 12 times three - grew up in Sussex, where his father Kevin is a tree surgeon.

But it is the maternal side that is responsible for that rather neat nominative determinism. His father changed his original surname of Fentiman to his wife Beverley's when realising how his business could benefit from the Twelvetrees handle.