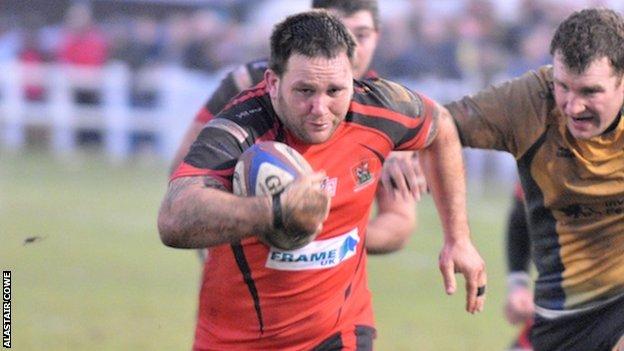 The win puts third-placed Redruth eight points off Worthing with two games in hand, as the visitors suffered only their third loss of the season.

"The boys are playing great and it's awesome," Jacques told BBC Radio Cornwall after the Reds had turned around a 10-5 half-time deficit.

"You've got to be a good side to come to Redruth and beat us here."

But with a strong wind at their backs in the second half the Reds capitalised as Tom Duncan went over twice in seven minutes to put the home side 19-10 up.

Tries from Kiba Richards and Jack Maslen saw Worthing take a 22-19 lead before Aaron Penberthy, who rejoined the club on loan from the Cornish Pirates, scored a try with three minutes left and Paul Thirlby's conversion sealed the win.

"Going into the game at half-time I thought it was never in doubt," Jacques added.

"We've played 60 minutes of rugby in seven weeks. I thought it was never in doubt, all we needed to do was sharpen up a few things that we were doing.

"We probably made the game a lot closer than it should have been.

"We gave away two sloppy tries in that second half and the game should have been cut and dried earlier."