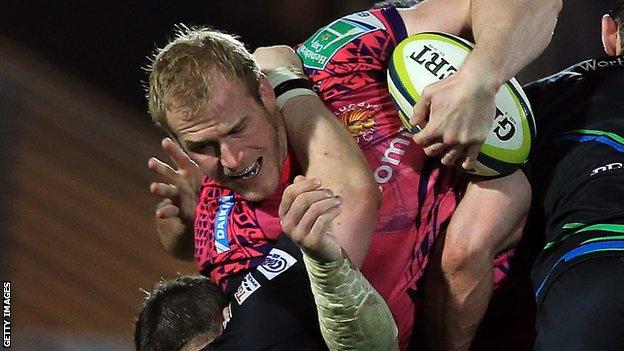 Exeter's Damian Welch says Saturday's LV= Cup game against Northampton is a chance for him to try and force his way into the Chiefs' Premiership squad.

The lock has yet to feature in England's top flight since

"No-one comes to a club wanting to sit in the stands, the idea is to try to push on," he told BBC South West Sport.

"I've come down here to try and get some game time and this is a good chance for me to try and do that."

Despite only featuring five times in the first team all season, Welch feels he has developed since making the move from Wales.

"I think my game has come on in leaps and bounds," the 30-year-old said.

"It's been a good environment for me in terms of the way we train and the way we play seems to suit me.

"I can feel things getting better, like my ball carrying which has become much stronger."

After Exeter's LV= Cup destiny is out of their own hands.

They have to hope they can beat Northampton at Sandy Park and Harlequins lose at Ospreys if they are to progress to the semi-finals.

"Quins are in the box seat, all we can do is ideally get a five-pointer so we an put as much pressure on them," added Welch.

"It would have been nice to have had a win at Bath last week because we know we left a lot of points on the field."