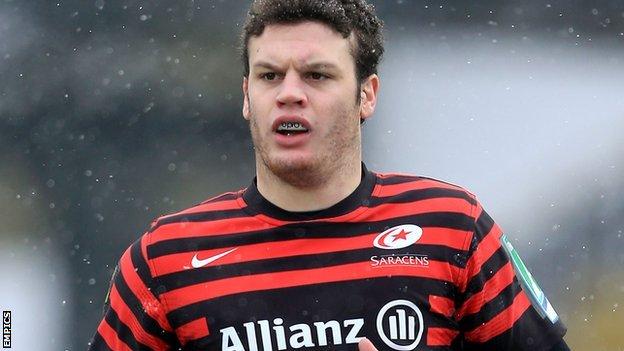 Scotland A followed up last season's thumping victory over England Saxons by overcoming driving rain and snow to earn their first ever win in England.

Scotland took a first minute lead in Newcastle through a try from Saracens winger Duncan Taylor.

Tom Heathcote converted and added a penalty, with two George Ford kicks making it 10-6 at half-time.

The two fly-halves then landed a penalty apiece as Scotland's committed defence saw them home.

Last year Scotland A romped to a stunning 35-0 win against England's second string but in appalling weather in the north east, they will be delighted just to have come away with the win.

The difference between the two sides was Taylor's try and it came inside the first minute.

England fly-half Ford kicked poorly under pressure, with the strong wind blowing the ball back towards the home line, and Taylor out-jumped Tom Biggs and stepped inside the cover to cross untouched.

The Scots made full use of a strong wind at their backs in the first 40 minutes and were the more adventurous team.

With the wind behind them England would have fancied their chances of overhauling the visitors, but a combination of English errors, ferocious Scottish defence and heroic scrummaging from the Scots kept the Saxons out.

Scotland could have added a second try but Jonny May bundled big Scottish wing Nikki Walker into touch to save a certain score.

But they soon extended their lead through the boot of Heathcote and although Ford landed a third penalty, that was all the hosts could manage.

England launched a late assault with a series of five-metre scrums, and Scotland had two props sin-binned.

But England's bid to force a penalty try was thwarted because injury meant Scotland could not bring their fourth prop back onto the pitch, leading to uncontested scrums.

And the hosts' attempt to batter their way over from a penalty came to grief when a poor Ford pass hit the deck and took the Saxons' chances with it.

Not Used: A Walker, McAlpine, Stevenson.