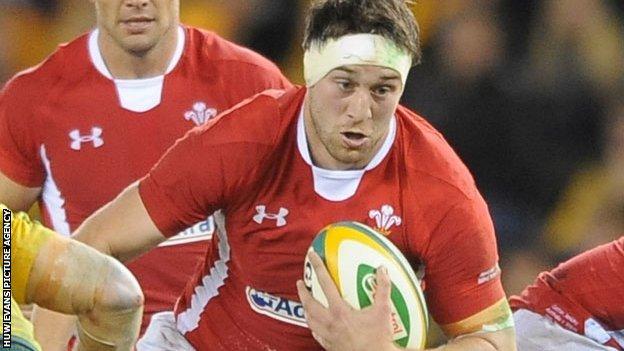 Aaron Shingler, Ryan Jones and Richard Hibbard have all been declared fit to face France in Wales' Six Nations match in Paris on Saturday

Flanker Shingler damaged a rib as Ireland won 30-22 at the Millennium Stadium on the opening weekend of the tournament.

Jones (thumb) and hooker Hibbard (shoulder) both missed the game with injury but can travel to Paris.

Uncapped Ospreys wing Eli Walker has not recovered from a hamstring strain.

Defence coach Shaun Edwards said Jones' return was a boost ahead of the trip to France.

"Ryan Jones brings a wealth of experience and technical know-how," he said.

"I thought he was absolutely outstanding coming off the bench for us last year in the Six Nations.

"When he starts he can start in a variety of positions, we know he can play second row at a pinch, but six and eight is his preferred positions and he can even play seven.

Jones, who captained Wales to the Grand Slam in 2008, dislocated his thumb in the Ospreys' Heineken Cup draw with Leicester in Swansea last month.

His Ospreys team mate Hibbard aggravated a shoulder injury in the match against Leicester.

Shingler had been a doubt for the trip to Paris after being forced off with a rib injury against Ireland.

Along with Jones, he can play in the second row where Wales have been badly hit by injuries.

Wales started against Ireland with uncapped Andrew Coombs at lock alongside Ian Evans, who was making his first appearance since injuring a knee in November.

Bristol-born Kohn, 31, who is eligible via a grandfather from Fleur de Lys in the Rhymney Valley, made his debut as a second-half replacement for Evans.

Shingler, Jones and Cardiff Blue Lou Reed are possible lock options, with Alun Wyn Jones (shoulder) having yet to prove his fitness since suffering his injury in November.

Beck and Lydiate could return during the Six Nations, but Jarvis and Priestland will play no part in it.