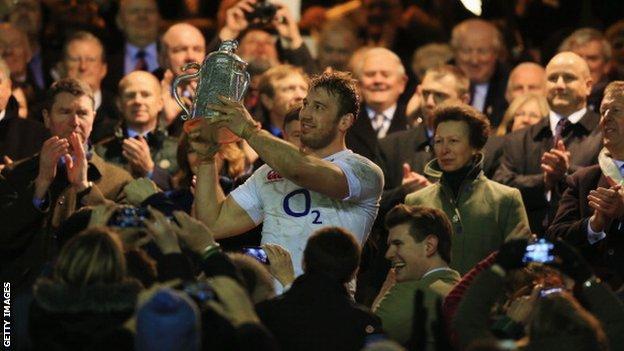 England beat the All Blacks 38-21 last December and were in fine form against Scotland, running out 38-18 winners.

"We have been building steadily and getting more consistency," Lancaster told BBC Sport.

"That New Zealand game us a lot of confidence. Now we've got to continue to build on that."

Centre Billy Twelvetrees marked his England debut with a try and Chris Ashton, Geoff Parling and Danny Care also crossed as Lancaster's men saw off a spirited Scotland side.

"I'm really pleased with the scoreline," said Lancaster. "I'd have taken that at the start of the day.

"We knew that if we kept the pressure on Scotland they would struggle to cope with it in the last 20 minutes.

"We were a little loose on occasions but, overall, I'm pleased with the start."

England tackle Ireland in Dublin next Sunday, Declan Kidney's side having got their own Six Nations campaign off to a solid start with a 30-22 win against Wales in Cardiff.

Twelvetrees, in the side for the injured Manu Tuilagi, said: "It was nice to get on the scoreboard. It hasn't really sunk in yet.

"I'm delighted to get out there and play in front of a great Twickenham crowd. I just wanted to do what I do for Gloucester every weekend."

He said: "The boys work hard to get these penalties and it's important to reward them by kicking them over.

"We played with real pace and tempo and I thought the intensity was good. But we can be hard on ourselves as well - there are plenty of things to work on."

England only have one injury concern ahead of their next match, in Ireland non Sunday.

Number eight Ben Morgan has been receiving treatment on an ankle injury and Lancaster will give an update on his progress on Monday.