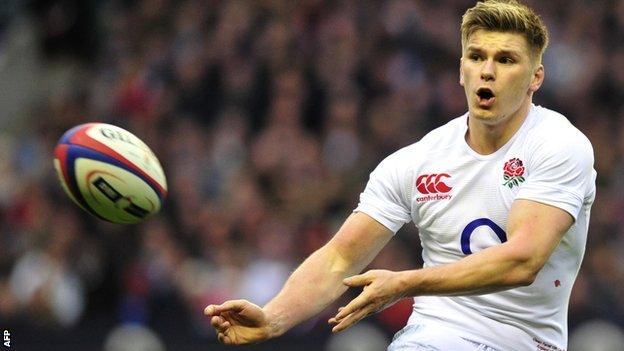 As 80,000 red-cheeked spectators streamed away from Twickenham on Saturday evening, beery breath and hip-flask hiccups mixing with the waft of chip, pie and braii, there was something else in the air too, something more nebulous: optimism, expectation, excitement.

England's 38-18 victory over Scotland might not have shocked the bookmakers, who had the home side as narrow as 1/10 for the win. But in the substance of the performance, display of the key men and margin of victory was further proof that this team might yet be capable of surprising both fans and critics alike.

At the pivot of it all was Owen Farrell, a fly-half only recently maligned for being one-dimensional who is now starting to look both frighteningly precocious and exhilaratingly talented.

We have always known that Farrell can kick, which is why his excellence with the boot on Saturday - 17 points, just a single conversion missed all afternoon - raised spirits but few eyebrows. We have also seen glimpses of a mature game-management at odds with his tender years.

What not all were aware of before this display was a vision - and ability with ball in hand to implement it - of an international 10 of significant calibre.

Farrell is no finished product. Few 21-year-olds are. He does not possess a sprinter's pace nor side-stepper's shimmy. But with every game he plays for his country - and this, we should remember, was only his 13th cap - there are further signs that he may become England's best in that position since a certain J Wilkinson.

To some believers it will be almost heretical to compare Farrell to the World Cup-winning wonder. It may well be too soon.

What makes the association tempting is the aura of calm and control Farrell is starting to display. Calcutta Cup matches are no sort of spot for the nervous, nor the insubstantial. Neither are Tests against the All Blacks, or in Paris against Les Bleus. Yet in all those arenas and more, the Saracens tyro has exuded the authority of a player with triple his international experience.

Wilkinson was the public face of England's last great team. Rugby diehards preferred to share the credit with those inside and outside him who lightened his burden and sparkled in his shadow.

In that respect, the absence of a centre to fill the substantial boots of Will Greenwood was more keenly felt than most. Which is why, with the significant caveat that he is only one match in to his senior England career, the performance of Billy Twelvetrees on debut was so heartening.

Twelvetrees shares more than an arboreal handle and Leicester Tigers schooling with his illustrious predecessor at centre. There is the build - 6ft 3in, lean yet powerful - the angles of running and the denting of defence.

Twelvetrees' numbers in his 68 minutes on the pitch were the sum of his parts: 15 carries, 62 metres made, the gain-line crossed eight times.

On several occasions he made the sort of half-breaks that can set supporting runners free; his try, battering through two soft shoulders from Ben Youngs' flat pass, was coldly clinical. Manu Tuilagi's return from injury is imminent. But Twelvetrees is equally set to stay.

Up front, England's forwards provided the possession and pace that allowed those two young bucks to flourish.

The back row unequivocally won the breakdown battle. Ben Morgan once again carried with broad-shouldered elan; Tom Wood is a blind-side with vision to match his physical gifts, while Chris Robshaw was everywhere an awful lot of the time.

Throughout the pack there was dynamism and destruction. Joe Launchbury may have been denied a first international try by the late intercession of a touch-judge but no-one can deny the impact he is making at elite level. Alongside him in the second row Geoff Parling was similarly energised, while up front the inexperience of Joe Marler and Tom Youngs was forgotten in their set-piece strength.

At times the off-loading game went too far, or fell apart on cold fingers. But there was an eagerness and ability to keep ball alive that England sides of recent vintage have seldom matched, exemplified by Marler's nicely timed pass that led to Chris Ashton's first-half try.

"England don't play much," the Scottish stand-in forwards coach Dean Ryan had said in the build-up. If anything, the opposite came to pass. England carried the ball 153 times and kicked from hand on only 28 occasions, making 597 metres and 11 line-breaks to accompany the 19 off-loads.

At periods in the second half there was an imprecision that cost further scores. Equally there was almost no point when the advantage was ceded. England bossed the possession, 62% to 38%, and with almost 70% territory were dominant for long spells.

For Scotland, this match was never going to decide the fate of their Six Nations campaign. That will come next week with the visit of Italy, when the green shoots visible on Twickenham's wintry turf must flourish despite the Azzurri assault.

The inclusion of a Laidlaw and Beattie in the XV encouraged the romantics to dream of a win to match the famous vintage of 1983, but well though the descendents acquitted themselves there seldom looked like being an overdue repeat.

In the explosive back three of Stuart Hogg, Sean Maitland and Tim Visser, Scotland's current crop have reason to be cheerful. The tries of Hogg and Maitland, and the searing breaks that created them, were a thrilling antidote to the stodgy horrors of that defeat to Tonga in the preceding match.

But the forwards were second-best in contact and slower in thought and deed than their counterparts. Exciting though the spectacle was - and as Calcutta Cup matches go, this was delightfully open and attacking - Scotland were support act rather than superstars.

England too have more critical tests ahead. Next Sunday's ding-dong in Dublin will provide a sterner examination of their championship credentials, the memory of that chastening demolition as they sought the Grand Slam two years ago still fresh in the minds of supporters, if not this fresh-faced team.

Ireland's harum-scarum win over Wales at Saturday lunchtime held both threat - the return of O'Driscoll's conjuror's hands, the wrecking-ball power of the back row - and opportunity: their panicked second half display was as limp as the first half had been mighty.

For now, anticipation in England ranks will swell. And, rather than having arrogance as its source, as Jim Telfer this week claimed, there is straightforward sporting logic.