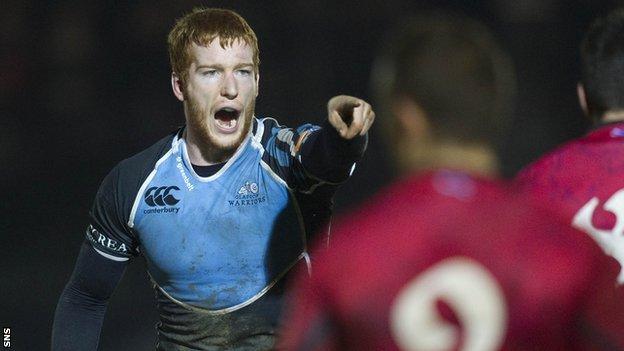 Interim coach Scott Johnson has made two changes to the Scotland line-up for Saturday's Six Nations meeting with Italy at Murrayfield.

Rob Harley takes over from the injured Alasdair Strokosch at blind-side flanker while hooker Ross Ford replaces Dougie Hall, who is named on the bench.

Harley scored a try on his debut during last year's summer win against Samoa.

"He deserves this chance as a reward for his club form," said Johnson of Glasgow's 22-year-old flanker.

"He's big and aggressive and he's been knocking on the door for selection for a wee while.

"He's got a great work ethic and the right to be angry being a red head. The fact is we need some contact dominance and he provides that. I'm really, really happy to have him back."

Harley admitted to having nerves ahead of his first start for the national side, but insisted that was a good thing.

"Will I have any nerves?" he said. "Yeah, definitely. Huge nerves.

"But I will try and use that to my advantage.

"I'll be really nervous in the build-up but hopefully as I get towards kick-off I will be able to focus on what I've got to do and by the time I get out on the pitch, there won't be so many nerves.

Ford, who was dropped for the Calcutta Cup defeat at Twickenham after starting Scotland's last 24 Six Nations matches since 2008, returns to win his 65th cap.

Hall sustained a knee injury against England and a decision on whether he - or Glasgow team-mate Pat MacArthur - will take the replacement hooker's role will be made later this week.

"Italy's victory against France in Rome was well-deserved and certainly didn't surprise us," added Johnson.

"We want better effort. The game, once again, will be based in the contact area and my thoughts after the game against England haven't changed to now.

"We know what the issue is and we are deluding ourselves if we say it is anything else. We just need to get better at it and I'm sure we will."

Strokosch will see a surgeon to assess the facial injury he suffered at Twickenham and whether he can play any further part in the tournament.