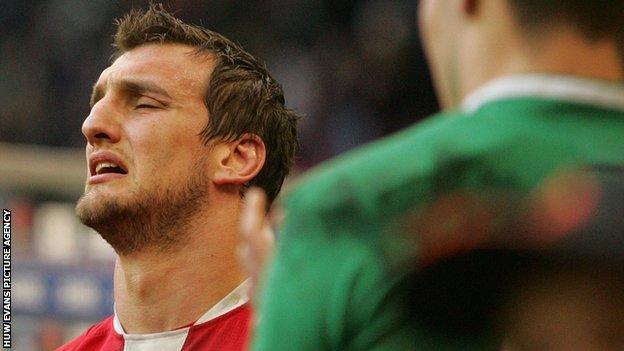 The fall-out from Wales' losing start to the Six Nations has mirrored their performance in the opening quarter of the 30-22 defeat by Ireland.

It has been dominated by a theme of bewilderment and confusion over what has happened to the team that, not so long ago, were the darlings of northern hemisphere rugby.

Having reached the 2011 World Cup semi-finals and gone on to win a 2012 Grand Slam, Wales have now lost a record five successive games at the Millennium Stadium.

Injuries, particularly up front, and the poor European form that has affected the four Welsh regions of Newport Gwent Dragons, Scarlets, Cardiff Blues and Ospreys are seen by many as the major underlying factors behind the slump.

Against that backdrop, Rob Howley is standing in for British and Irish Lions coach Warren Gatland as Wales' interim boss.

Speaking on the BBC's post-opening Saturday red button forum, new BBC Six Nations pundit Woodward said: "It's tough on Rob. Because let's face it, Rob Howley didn't put his hand up and say 'I want to be the head coach of Wales'.

"He was there doing a great job with Warren Gatland. Gatland, I think, rightly stood down.

"To do the Lions you do have to step back from it. So he's [Howley] been put in this situation.

"And from 12 months ago [Sam] Warburton - probably favourite to be Lions captain - has suddenly dropped out of the whole rankings and Wales are on this nightmare run.

"So you've got to also admire him [Howley] for stepping up to the plate and doing what he's doing.

"But for them to lose that game; whoever lost, the coach was going to be under a huge amount of pressure.

"And for Wales to go to France next weekend on a Saturday is going to be a huge ask for them.

"But they must be in a bit of shock because they've gone from World Cup semi-finalists, which was only just over a year ago and arguably [good enough] to get in a final, to Grand Slam winners.

"And now these five [defeats] in a row [at the Millennium Stadium] - you've just got to wonder what's actually happened.

"I think Wales are a bit like Scotland - they've got a fantastic starting XV when everyone's really fit.

"And they can't afford to lose both their first-choice locks because the guys coming in are just not quite up to the plate so they've just got to hope they get some of their main guys back.

"They had a really poor first half and that's what will really worry the whole coaching team."

Another BBC pundit, former England centre Jeremy Guscott, wonders why a team containing what he believes is a worthy proportion of world class talent has lost its "mojo".

However, Guscott believes the seeds of their downfall may have been sown at several training camps in Poland ahead of the World Cup and 2012 Six Nations - an exercise that was not repeated in 2013.

Guscott said: "Statistically you could look at their whole team, what they're doing and pinpoint an area of weakness.

"I still - and I've said it on Scrum V - look at them and individually the talent is still there.

"You look at that front row [of Gethin Jenkins, Matthew Res and Adam Jones], that's as good as any front row you'll get in this competition, if not in the world.

"And yet their belief has been drained from them and it could all stem back to this exercise in Poland.

"They went there and thought it was so good for them in the past, leading up to the World Cup.

However, as Wales' form and predicament is discussed while Howley's coaching and selection come under harsh analysis, the former Wales and British and Irish Lions scrum-half emphasised the players at his disposal are 'on message' with the management's demands.

Prompted by the post-match media inquisition, Howley responded: "To come back from 30 points to three down to where we were - I think it is a silly question to ask about players buying in."

But the final thought goes to another former number nine, Scotland's Andy Nicol, who summed up Wales' situation as they contemplate away games against France, Scotland and Italy.

"Wales, having lost that [against Ireland], are under the cosh now," said Nicol.