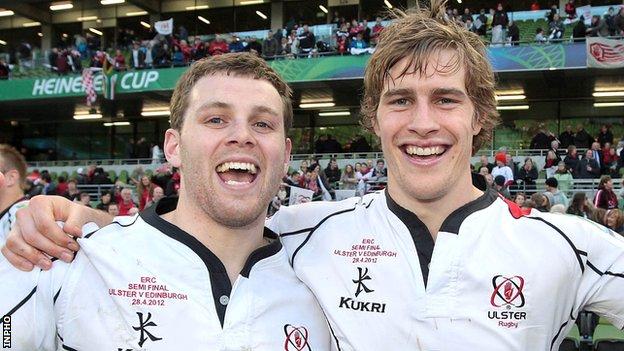 Ulster backs Darren Cave and Andrew Trimble have been called in as cover to Ireland's injury-hit squad for Sunday's Six Nations clash against England.

Gordon D'Arcy and Keith Earls are the main injury concerns so the Ulster duo are called up with Connacht's Robbie Henshaw and Leinster's Rhys Ruddock.

Ruddock provides back row cover although Peter O'Mahony is expected to be fit for Sunday's game.

D'Arcy has a leg injury with Earls bothered by a shoulder strain.

"The prognosis is still guarded but we are more hopeful than we were yesterday. He (D'Arcy will do modified training today and tomorrow," added the Ireland team official.

"Keith took a blow to his left shoulder that was quite sore. The prognosis is guarded.

"He will do modified training today and tomorrow and will be reviewed by a specialist tomorrow."

Flanker O'Mahony was treated for concussion after the weekend win and appears to be in line to retain his place for Sunday's match.

"He was fine after the game and was well today," Kearney said.

"He'll follow the IRB return to playing guidelines and it depends on how he recovers during the week."

Brian O'Driscoll and Mike Ross played a full part in training on Tuesday after suffering a head wound and severe cramp respectively against Wales, while Rob Kearney is available for Sunday despite his bruised back.

The ailments in the Ireland camps means that Declan Kidney has put back the announcement of the team from Wednesday to Friday afternoon.

Ross's fitness is of huge importance to the Irish after their scrum struggles at Twickenham last year.

The Irish scrum was already under pressure by the time of Ross' departure just before half-time and his replacement Tom Court endured a chastening experience as England went on to record a thumping 30-9 victory.

Ireland forwards coach Gert Smal accepts that England will target the Irish scrum but appears optimistic that there will be no repeat of the Twickenham front row horrors.

"Last year is last year and we've worked on a couple of things," added Smal.

"We showed against Argentina in the autumn and last Saturday that we can scrum.

"We know exactly what we're in for, it's going to be tough but I have full confidence in the players."