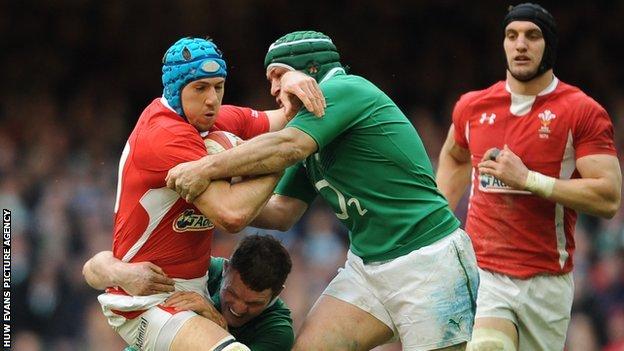 Wales were second best in the contact area in their opening 30-22 Six Nations defeat by Ireland in Cardiff.

"I would [play both together]," Williams told BBC Wales' Scrum V.

"France will play a huge driving game... but we've got to worry about ourselves and we'll play better rugby with Justin on the pitch."

Wales opted to start against Ireland with skipper Warburton at open-side and the 6ft 5in Aaron Shingler at blind-side, giving them another line-out jumper option after injuries to first-choice locks.

Shingler came off with a rib injury against Ireland and is a doubt for the trip to Paris.

Newport Gwent Dragons blind-side Dan Lydiate is another big injury absentee but Williams believes that Wales should have started with Tipuric, who made an impressive impact off the bench after 43 minutes.

"I was pushing for it last week to play the two of them [Tipuric and Warburton] together," added Williams, who won 100 caps for Wales and four for the British and Irish Lions.

"If Dan Lydiate was there he's the first name on the team sheet, but with him not being there I think Justin and Sam could have played.

"I think we missed a trick [against Ireland] by not selecting him, it was always going to be an open game with Ireland, with the Leinster influence, they were always going to throw the ball around.

"Justin came on... it was a 'no-lose' situation, you're 30 points behind, the referee starts giving a few 50-50s your way and you get the momentum.

"I think the contact area first half just set the tone and the reason they were able to slow the ball down was our forwards were going in ones and twos.

"I watched England later on [in their win over Scotland] and all their forwards were making off-loads, passing, just changing the point of attack which makes the contact area so much easier.

Former Wales captain Gwyn Jones, like Williams a specialist open-side, was surprised at the way in which Ireland bossed the breakdown and called on Wales to improve at that area at the Stade de France.

"I was surprised at the difference between the two sides in so many aspects of the game," Jones said.

"We were turned over five times in attack in their half in the first half... and we didn't turn them over once in attack in our half, when all that pressure always ended in points. That was the difference between the two sides.

"In the first 44 minutes they were 30-3 up; whatever happens after that, however encouraging it is, it's irrelevant because those 30 players know there's only one team winning that game."

Jones admits that Wales won the Grand Slam last year playing a very physical game-plan under head coach Warren Gatland, an approach that still appears to be plan A under interim coach Rob Howley, in charge while Gatland is away on Lions duty.

"Everyone knew how Wales were going to play last year, it's just they couldn't stop us and we were better at it, we were more efficient," Jones said.

"We didn't pass the ball much; our centres passed the ball the least in the championship last year and we still won it. We've got two big, powerful centres.

"I was amazed that we were so upright in contact knowing that Ireland are the team that do the choke tackle better than anyone."