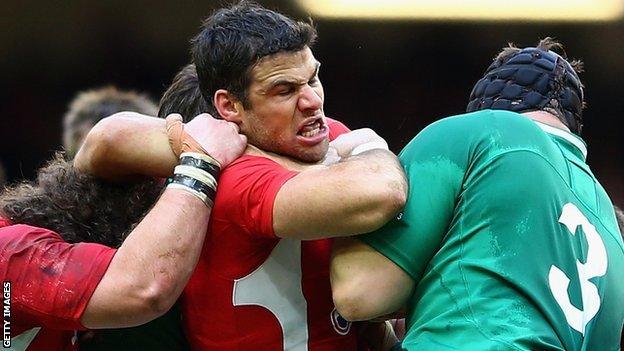 Scrum-half Mike Phillips has urged Wales to take a "no fear" approach into Saturday's Six Nations clash against France in Paris.

Wales and their hosts both lost their opening games as Ireland won 30-22 in Cardiff, while Italy beat France 23-18.

"We need to back ourselves and come out of our shells and really go for it," said Phillips, who plays for Bayonne.

"We need to play with no fear from the start, we've got to cut the mistakes out and have belief."

Since Mike Ruddock's side took the spoils eight seasons ago, Warren Gatland guided Wales to Slams in 2008 and 2012.

But since beating France in Cardiff to claim the 2012 title, Wales have won only once under interim coach Rob Howley, a 30-21 win over the Barbarians in June, and have since suffered eight successive losses.

Phillips, 30, played in the 2008 and 2012 successes, but made way for Cardiff Blues rival Lloyd Williams in the second half against Ireland.

The former Llanelli Scarlets, Cardiff Blues and Ospreys player, who joined French side Bayonne in 2011 said: "It is going to be immensely tough, but we've just got to go there with belief and play some rugby.

"When we get desperate we tend to play a bit better.

"We need to have an edge about us from the first whistle and throw everything in.

"We gave away a lot of penalties in the first half [against Ireland] and couldn't really get our hands on the ball. We couldn't get started.

"First things first, we've got to start better. The game got away from us in the first half. We were off the boil."

Full-back Leigh Halfpenny also rued Wales' opening period failure against Ireland, saying: "Every time they got into our 22 they came away with a try or points.

"When we got into their 22 we failed to take our opportunities.

"But we can't bury our heads in the ground and feel sorry for ourselves.

"We have to take a long, hard look at ourselves in the mirror and dig deep next week."