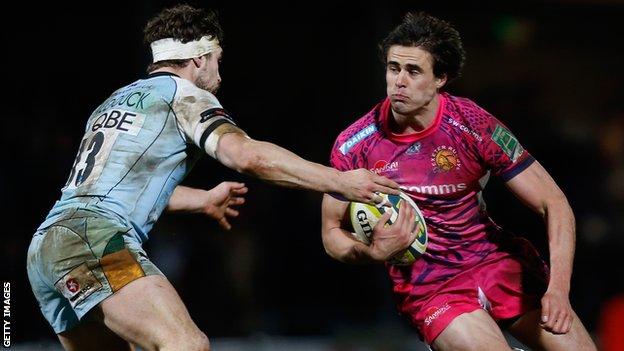 The Chiefs had lost their last seven games in all competitions going into the fixture at Sandy Park, and finished second in their group.

"It's a massively important win for us going back into the Premiership," he told BBC Radio Devon.

"It will build that momentum going into the game up at Sale on Friday."

Exeter ran into a 22-0 lead in the first half after tries from Ben White, Jack Nowell, and a first score for new signing Watisoni Votu, as well as a penalty from Ignacio Mieres.

Alex Waller pulled a try back for Saints before the break and Lee Dickson got a second after the re-start.

Mieres then kicked two more penalties before Dickson's second try made the score respectable for the visitors.

"It was a hell of a result. Individually and collectively the boys fronted up," Pellow said.

"To get a win like that was massively pleasing.

"In the first 20 minutes anything they threw at us we matched it, when we had the ball we carried well and created chances.

"Moving on from Bath last week, we took those chances and to go 22-0 up showed the hard work the boys had put in."

Exeter played a much-changed line-up from the side that had played in the Premiership and Heineken Cup in recent month, and Pellow says those that have featured in the last two games have given themselves a chance for a Premiership place at Sale.

"To have that many selection headaches on Monday when we talk about the squad that will play against Sale will be tough.

"But it's pleasing to have those decisions to make."