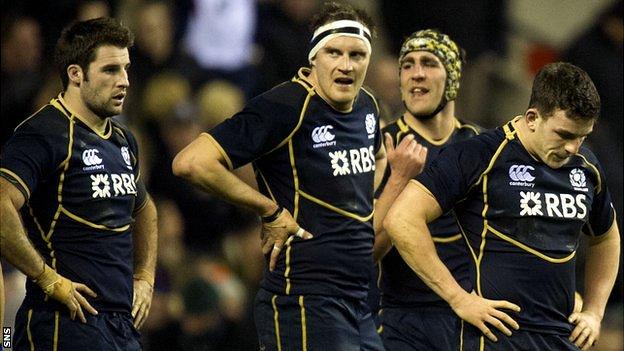 It was a tame weekend, so I didn't get it in the neck. And that particular part of the body is the topic of my rant today.

But first: my 1983 reunion was a virus-infested disappointment.

I think I had a grand total of an hour with some of the best rugby players in Scottish rugby history. It was all very unsatisfying.

A cup of tea with Roger Baird, a quick hello at London Scottish rugby club with Iain Paxton, Roy Laidlaw, Peter Dods, Jim Aitken and others, followed by 10 minutes at a restaurant sitting beside John Rutherford before saying sorry and rushing home.

Pathetic. Seriously, I'd looked forward to this for months.

Added to that, I had to watch the game without blethering about it on BBC Radio Scotland; which proved surreal.

What's the point in having a theory and being unable to share it?

You and I both watched the game so we have our own conclusions. I watched it again last night.

Some of what Scotland did was good

Some of what Scotland did was good, but the second-half effort fell away in the face of England's tidal wave attacks.

They use a running scrum-half to stop an advancing defence and then put runners hard at the gain line.

England's play has taken more than a year to come together for Stuart Lancaster, whereas Scott Johnson and Dean Ryan have had two weeks with Scotland.

And, remember, they haven't even been able to train every day: Scotland will get better.

The trouble is the Italians were pretty good.

But I want to pick out one piece of play I see at more and more games. It's a high tackle, but not as we know it.

And pretty soon we are going to see players hurt at rucks because more and more teams break that particular law as they clear players away at breakdown.

It's all because defenders are getting better at what they do.

Perhaps the skill learned most by rugby players recently is the art of bending over a tackled player to forage for the ball. Brian O'Driscoll is the best in the world at it.

Every rugby union player, when in the defending team, now practices arriving first at a ruck to bend double over the tackled player and get his hands on the ball.

Some are even coached to pull the ball harder into the stomach of the tackled player to make it look as though the hapless attacker is making no attempt to release the ball.

Whatever, they are now hard to move. Legs splayed, and getting some support from team mates, these particular defenders have become a problem. It's a powerful position.

Players arriving from the attacking team can try to blast them away, but it's difficult.

So what happens more and more often - and it seemed to have been the planned and coached method in a couple of the matches on the opening weekend of the Six Nations - is that attacking players will grab the defending players round the neck and "twist" them off the ball.

"Twist" is, I reckon, the right word. It's a very powerful movement.

One arm goes right around the neck, the other under an arm, and then the player from the defending side is yanked off the ball. If someone gets you round the neck then, your honour, you follow their lead.

Or else your neck is in trouble.

And it was when Brian Moore pointed out in commentary that a high tackle, according to Law 10.4 e, merely has to ride up to the neck to be dangerous that I started thinking about what I was watching in ruck clear outs.

Surely these are high tackles, semi-hidden in the dense undergrowth of a fast moving ruck?

Every ruck in every Six Nations match gives schoolchildren the idea that to grab a player round the neck is fine and dandy.

I think it's dangerous play and should be banned. Is it a tackle? Well, that's a debatable point.

Whatever, as I watch it, I am waiting for the day when someone causes a serious injury.

Oh, and by the way, I liked the description of Simon Zebo's flick as "rugby sex". Without a ruck in sight too?

So far the Irish, the English and the Italians are looking good.

Yes, it's great to be alive and at the Six Nations, although in my case it was barely alive.

What did you make of the games?