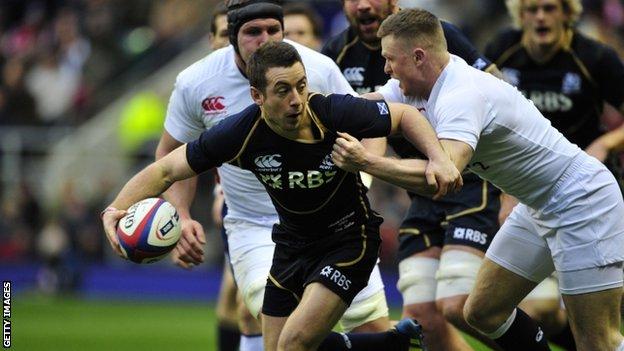 The Scots opened their Six Nations campaign with a 38-18 defeat by England at Twickenham on Saturday.

However, scrum-half Laidlaw said the side were bullish despite the loss.

"We really want to give our fans what they deserve - a win. There were huge positives in Saturday's performance and we looked very dangerous at times," he told BBC Scotland.

Sean Maitland's 10th-minute try offered the visitors brief early hope but England came roaring back. And Italy will travel to Edinburgh in fine fettle following their victory at home to France.

"England disrupted us at the breakdown and we struggled to combat that a little bit," said Laidlaw.

If we can get all the little parts right, we'll cause Italy huge problems

"That's something we're going to work on this week and hopefully put right before the Italy game.

"England maybe caught us on the fly a little bit and the breakdown area killed us."

Failing to win the contact area means it is difficult for Scotland to win games, he added.

"I felt comfortable (on Saturday) and there's definitely improvements I can make through the tournament.

"Hopefully, my performances will come up to a higher level and we'll pick up wins."

Laidlaw said he had yet to watch Italy's win against the French but is determined to give the Murrayfield crowd a victory next Saturday.

"It was obviously a good win for them and it gets them off to a good start in the competition.

"But if we can get all the little parts right before that, we'll cause Italy huge problems."

Scotland should benefit from another week's training and the opportunity to iron out a few problems on the field, he added.