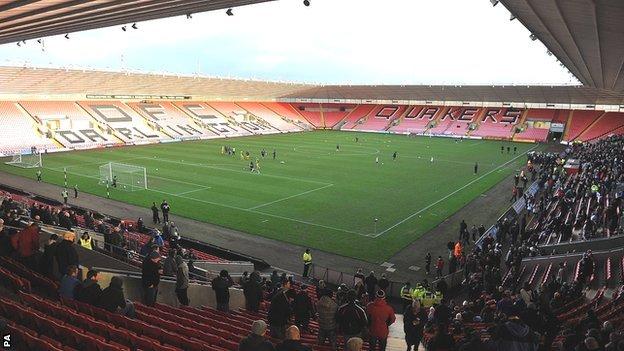 "It's a big building but that brings opportunities," Liddle told BBC Tees.

"We're confident with uses beyond sport we can make sufficient income for running costs and profits to develop."

He continued: "Running cost will be around £10,000 but possibly higher than that."

Potted history of the Arena

The 25,000-seater Arena had not been used since Darlington Football Club played their final fixture before effectively going out of business in April 2012.

The stadium's capacity is restricted to 10,000 because of access issues.

The Arena has acquired the reputation of being a white elephant since being built by then owner of Darlington FC George Reynolds in 2003.

It has had a number of owners since then but has never attracted large enough crowds to meet its running costs.

Parts of the stadium office space have been leased to local companies including a nursery and gyms, while plans are in place to expand on 40 acres of land for further pitches and playing areas.

"The stadium needs to cover a variety of uses, there are significant rental opportunities, the car park is an asset, and we're looking at concerts," Liddle added.

"We want to make the stadium accessible to the community, so everybody can enjoy it and provide an income for community rugby.

"It's not just the first-team, it's the 19 other teams from all age ranges from six onwards, and our thriving women's side."

The club have also bought 17 acres of adjoining land on which they intend to develop a multi-sports facility.