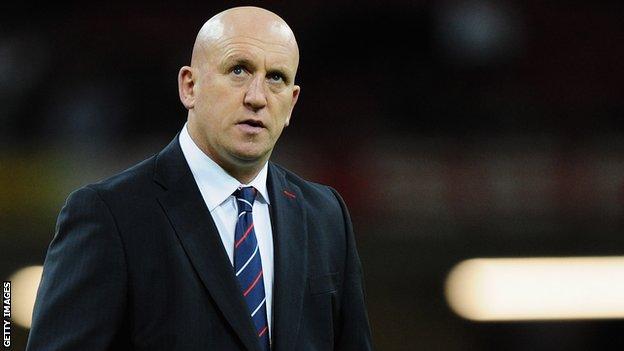 The 92-times capped Wales lock told Scrum V: "I've never been a believer of the blitz philosophy... and the teams that we aspire to be - Australia and New Zealand - don't blitz."

He also urged Wales to offer more attacking variety against France in Paris on Saturday.

Wales scored three tries in a stirring second-half fight back after falling 30-3 behind.

Llewellyn added: "It's something a lot of people have talked about for a few years now. We've got a very talented group of players.

"I actually feel sorry for guys like Jamie Roberts. There's a lot more to Jamie's game than we're seeing.

"But we're just asking him to play a particular way. It's very direct and it's going to take its toll on him eventually.

"And Ireland are not the biggest side in the world and we struggled to effect it against Ireland to a certain extent.

"England, France are going to be bigger nations and I'm not sure it's going to be effective against them.

"We need to bring a bit more variety to our game.

"We've talked about how fit we looked and our work-rate and what we did in the second half.

In a blitz, the defenders speed towards the attacking formation as the ball emerges from a ruck or maul, with a player positioned close to the point from which the ball has emerged leading the line of would-be tacklers.

"Its aim is to halt an attack before reaching the gainline and is viewed by some involved in the sport as 'high risk, high reward' because of potential space left behind the defenders that attacking teams could exploit.

"Well, two years ago we were telling everyone we were the fittest side on the planet.

"So if [interim Wales] coach Rob Howley wants to start that well, we need to back ourselves from the first whistle, not when we're desperate.

"Let's set a pace in the game and look after the ball."

Llewellyn says the blitz defensive formation favoured by Edwards cost Wales a win against Australia at the Millennium Stadium in November as the Wallabies scored a late winning try.

"We lost to Australia in the autumn because we blitzed at the wrong time and if we hadn't have blitzed in the last minute of the game they wouldn't have got outside us, we wouldn't have lost the match.

"And the teams that we aspire to be - Australia and New Zealand - don't blitz.

"I just think we've got to be careful that the big highlights that we get with the blitz defence, particularly Jonathan Davies spotting in and making a big collision, that overshadow, sometimes, the deficiencies of it."