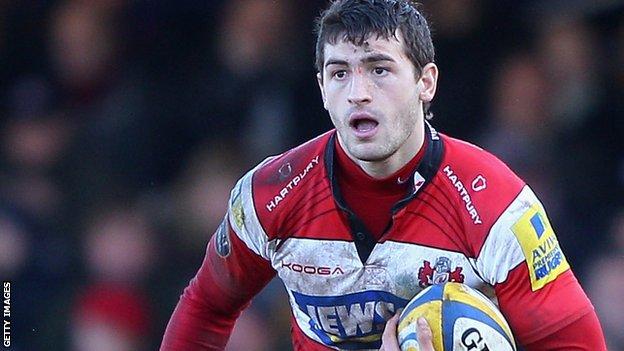 Jonny May twice went over as Gloucester ended a run of three Premiership matches without a try to beat Northampton at Franklin's Gardens.

May's fine individual effort in the first half put the visitors in the ascendency after Stephen Myler and Rob Cook had exchanged penalties.

The winger later broke clear to score his second try before Phil Dowson touched down to give Saints hope.

But the Cherry and Whites held on to move above Northampton in the table.

Myler and Cook swapped early penalties in a scrappy opening period edged by the hosts.

But Cook, ironically cheered by the Saints fans throughout for his unusual pre-kick stance, booted the visitors in front before May provided the spark the match badly needed.

The 22-year-old, back in the Gloucester side after a spell on England Saxons duty, showed quick feet to jink his way beyond the challenge of George Pisi and burst clear to go over in the corner.

Myler and Cook then fired over further penalties to leave the Cherry and Whites 11 points ahead at the interval.

Northampton, a man light following Gerrit-Jan van Velze's yellow card moments before the break, found themselves further behind immediately after the restart.

Ryan Wilson's handling error allowed May to steal in and he ran from inside his own half to put Gloucester in control.

May was then sin-binned for side-entry at the breakdown and as Dowson forced his way over Saints sensed a comeback could be on the cards, but in the immediate aftermath of the try, Samu Manoa was shown yellow for throwing a punch and with that home momentum was lost.

Cook's routine penalty with the clock ticking down made the match safe, allowing Gloucester to bounce back from two successive Premiership defeats with an important win.

"It was a very poor performance. We conceded two very, very weak tries. One from their line-out and one from our turnover ball where they went the distance.

"After that Jonny May interception we seemed to lose a little bit of confidence from then on.

"We know we've got good players, we know we can play some good rugby, and we just seem to have lost that little bit of confidence."

"It's been an intense week. We were really clear on what we needed to do to come here and get a good result.

"I firmly believe we were dominant in the scrum and we deserved to have a penalty try.

"The players will take a lot of confidence from this game. We've been disappointed with the last two performances. I knew where we were, and realised we could re-focus. This was a big game for us to do that."