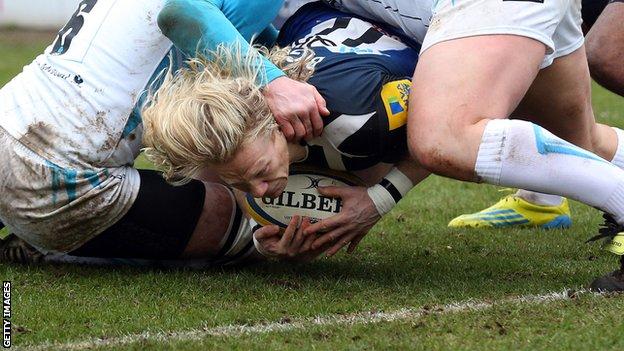 Bath eased to a bonus point victory over Worcester at The Rec.

Peter Stringer and Rob Webber went over for the hosts in the first half, only for three penalties from late stand-in Danny Gray to reduce the arrears.

But Stephen Donald, who missed three conversions, slotted an easy penalty to make it 13-9 at half-time.

And Bath ran riot after the break, Tom Biggs going over before two tries from Horacio Agulla, both converted by Tom Heathcote, put the result beyond doubt.

Worcester were forced into a late change, losing stand-off Andy Goode, who was violently sick in the warm-up after falling victim to a gastric bug in the visiting camp.

His deputy Gray was similarly stricken, kicking his three goals. But Worcester could not prevent Bath, who came into the game on the back of four consecutive cup wins, earning their first Premiership win since November.

Stringer, on loan from Munster, forced his way over the line after six minutes to score his third try in as many games.

Worcester then got themselves on the scoreboard through Gray's penalty but, with lock Dean Schofield in the sin-bin, Bath took advantage of the extra man, allowing Webber to go over on his first Premiership start for Bath.

Gray then landed two kicks to bring the Warriors to within a point of the hosts before Donald restored their four-point lead.

With team-mate Dave Attwood sin-binned, Eastmond linked up well to feed Biggs, who eluded the tackle to cross over.

Eastmond then lofted a stunning pass for Agulla to touch down, replacement Heathcote landing the conversion.

Heathcote then chipped to Agulla who landed a one-handed try, converted by the young Scotland fly-half.

"We've not achieved anything yet. It's going to become a real dogfight for us to try to edge up the table.

"We've just got continue doing what we're doing. Whatever else is happening in the table, we can't do anything about that. We'll just stick to the task and carry on.

"Kyle Eastmond was outstanding. We need the ball in his hands.

"He's a prodigious talent, who passes off both hands and, if he needs to kick, he can kick. We have to do the work to put him in the right positions."

"We're disappointed, because a lot of effort went in, for the 60 minutes certainly. In the first 40 we took the sting out of Bath. We had good pressure at the start of the second half, a driving line-out and the scrum.

"We had six or seven minutes of real effort and, if we had scored, we'd have gone into the lead.

"Not only did we not get over but we conceded a penalty. That was a killer blow and it knocked the stuffing out of everybody.

"A win down here would really have put us in touch with the top six. But it's going to be pretty tough now."