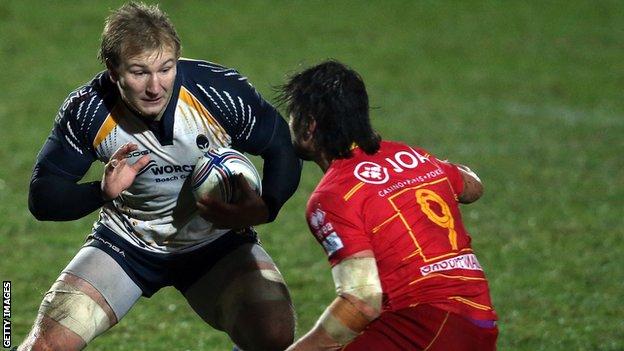 Matt Kvesic will leave Worcester Warriors at the end of the season to join near rivals Gloucester.

The 20-year-old has signed a two-year deal at Kingsholm.

Kvesic, who was born to English parents in Germany, came through the academy at Worcester and has now made 55 appearances for the first team.

He was promoted from England Saxons to Stuart Lancaster's Six Nations training squad, as a replacement for the injured Tom Johnson, but is yet to be capped.

"He's been influential in all the teams he's played for," Cherry and Whites director of rugby Nigel Davies told BBC Gloucestershire.

"As an out-and-out seven he's one of the best out there at the moment. He's also a leader and in successful teams you need leaders on the park.

"He's a young boy who is one of the rising stars in English rugby and for us to sign him is a big statement of intent."

Kvesic will compete for a place in the Cherry and Whites line-up with Andy Hazell, who is out of contract in the summer, and Matt Cox, whose deal runs until 2014.

"Andy is a great seven in his own right and brings a different dynamic," added Davies. "He's a Gloucester boy through and through. It's important we hold on to him.

"Matt is still developing - he can play six or seven - and is a very aggressive player. It gives us a lot of options and a lot of balance in what is a crucial area of the game."