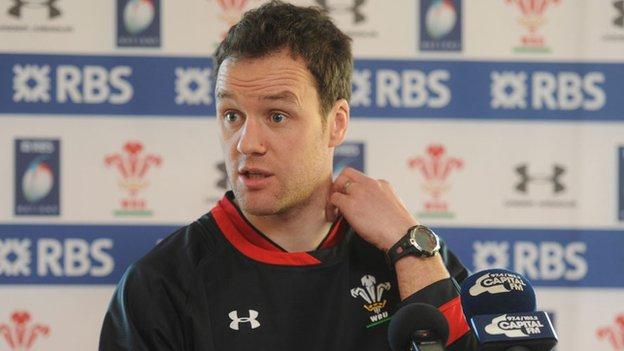 The Welsh management are picking the brains of their France-based players as they prepare for the Six Nations trip to Paris on Saturday.

Four members of the Welsh squad currently play in France, and backs coach Mark Jones says that could be used in Wales' favour.

"We've had conversations with those players [playing in France]," he said.

"You've got Wesley Fofana down in Clermont so we've been picking Lee Byrne's brains about his strengths."

Clermont full-back Byrne was the only one of the Welsh squad members currently plying their trade in France to miss out on the 22-30 loss against Ireland in Cardiff.

Prop Gethin Jenkins (Toulon) and scrum-half Mike Phillips (Bayonne) both started against the Irish, while James Hook (Perpignan) came on as a second-half substitute.

And Jones, who has been drafted in from the Scarlets coaching team for the duration of the Six Nations, believes their inside knowledge could be used on the pitch too.

"You might say [Wales should be] playing some of those players against them [France] as well," he said.

"They know their weaknesses even more, that's something else that comes into the equation and one that we're certainly thinking about."

Jones, who won 47 caps on the wing for Wales, believes the team will need that extra edge against a French team smarting after their shock 23-18 defeat by Italy in Rome.

"They [France] are a fantastic rugby team and they've got the potential to win very badly and win very well, that's how good they can be," said Jones.

"I'm never very happy to play France because they are a quality outfit, but I think it's a good game for us. It will focus the mind, we're very aware of how good France can be and I think it will make sure we prepare well."