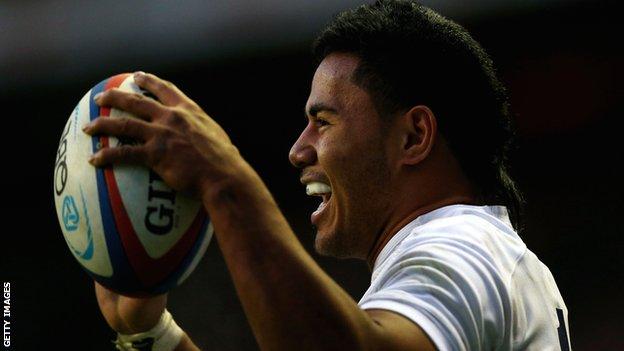 Manu Tuilagi is fit again following an ankle injury and could challenge centres Billy Twelvetrees and Brad Barritt for a place in the starting XV.

Twelvetrees marked his England debut with a try in Saturday's 38-18 win over Scotland at Twickenham.

"It's great to have a selection dilemma at this level," said Catt.

Billy Vunipola trained with us this morning and he is doing the afternoon session. I am looking forward to seeing what he can bring

"From a team point of view you have three guys and each of them bring special attributes. It is great Billy has come along and performed the way he did against Scotland on his debut.

"Manu has been out of the game for three or four weeks. We will see how they all train and we will go accordingly from there.

"If the guys have performed exceptionally well on the weekend, the guys coming in need to make sure they have the tempo and up the intensity to really put their hands forward."

Seven players were released from the squad on Tuesday night.

Number eight Ben Morgan, who injured his ankle on Saturday, is to stay with the camp for treatment and has yet to be officially ruled out of the trip to Dublin.

If Morgan is ruled out, head coach Stuart Lancaster has already suggested flanker Tom Wood could stay at number eight, where he finished the game with Scotland, with James Haskell - who featured for the last 35 minutes against Scotland - likely to come into the starting line-up.

Leicester's Thomas Waldrom is the other number eight in the elite squad, but 20-year-old Wasps tyro Billy Vunipola - who was born in Sydney to Tongan parents, grew up in Wales and is the brother of England prop Mako - is also under consideration for a bench spot.

"Billy Vunipola trained with us this morning and he is doing the afternoon session. I am looking forward to seeing what he can bring," added Catt.

England will confirm their starting side on Friday morning.

Saracens' flanker Will Fraser, a member of the second-string Saxons squad, has also joined the senior party as cover.