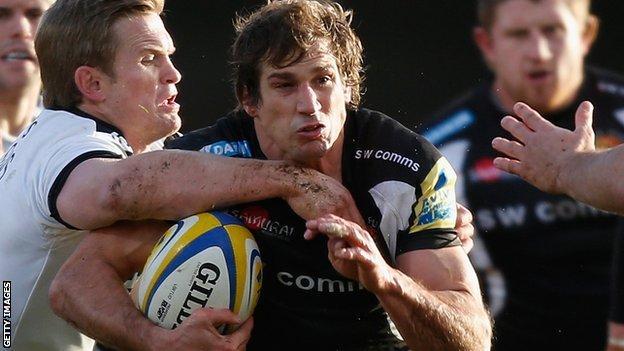 Talks are ongoing between Exeter and Argentine international winger Gonzalo Camacho about a new deal at Sandy Park, despite

Camacho, 28, is out of contract in the summer after

"We're already talking to Gonzo - we had a chat with him the other day," said Exeter assistant coach Ali Hepher. "We're progressing with that.

"You want everyone to stay but the reality is you can't keep everyone."

In addition to James, Exeter have Fijian international Watisoni Votu, who and the highly-rated Matt Jess signed up for next season.

Exeter have also used Irish international centre Ian Whitten in the wide areas, and have after making his Premiership debut late last year, as well as his England Under-20 teammate Jack Arnott.

"It's not just one person on the wing, one for one, we're looking at our whole recruitment," Hepher told BBC South West Sport.

"We're working through our recruitment at the moment. It's an ongoing process and hopefully we'll enter next season with a good squad.

"We're always speaking with them and their representatives and it's an ongoing dialogue."