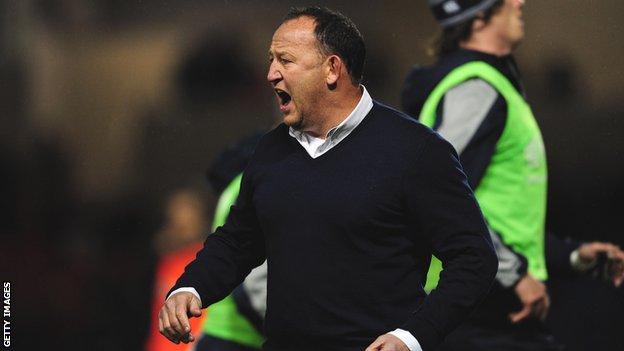 Director of rugby Steve Diamond has put Sale's recent upturn in form down to adopting a "back to basics" approach.

The Sharks are currently bottom of the Premiership but beat Scarlets and Wasps to finish top of their LV= Cup pool and earn a place in the semi-finals.

"We've got our set-piece right, so we can get some ball and get our defence right," he told BBC Radio Manchester.

"The attitude of the lads is fantastic. They're understanding what (head coach) Bryan Redpath and myself are about."

Sale will face Saracens at home in the last four of the Anglo-Welsh competition on 10 March, but their main objective remains to avoid relegation from the Premiership.

They are five points adrift at the bottom of the table and have the opportunity to close the gap when Exeter Chiefs visit the Salford City Stadium on Friday evening.

Meanwhile, Diamond has revealed that the club are in discussions with a number of players about the possibility of joining the club next season.

"We're at the front of the game with that," said the 45-year-old, who is again in charge of first-team affairs following

"We've got half a dozen players that we're talking to about joining us and we've got existing players who we're wanting to give new contracts.

"We're just being sensible about it. We're waiting a couple of weeks [while the deals are finalised] and then we'll announce the signings."

When asked if Sale's league position may delay the completion of those deals, Diamond replied: "It's a mixture of both. Let's be honest - we need to perform in the next two or three weeks, get some points and move up the league.

"We know we're in a precarious position. We're in that dogfight and we've got to get ourselves up the league so we can fight against the two sides that are near us."

Dan Braid is one player who is keen to commit his future to Sale.

The former New Zealand flanker, 31, and has impressed with his early performances.

"I've been here for a month and myself and the family have settled in nicely," said Braid. "I'm signed until the end of May but I want to stay and play rugby in the northern hemisphere.

"What happens will happen over the next couple of months. I'm enjoying my rugby here at Sale and if things turn out that way, it would be nice.

"But it's still early days. I'm still trying to get in here, impress and improve myself."