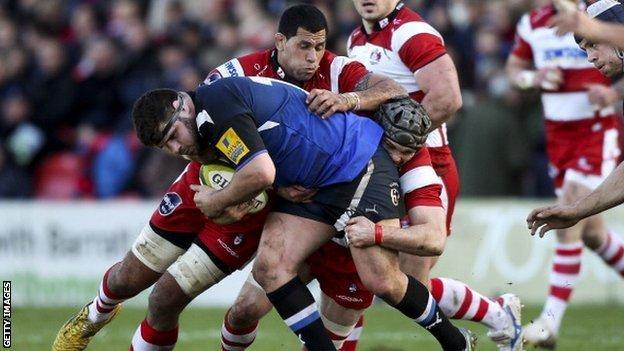 Rob Webber is in contention to make his first Premiership appearance for Bath after 10 months out of the game with a shoulder injury.

The hooker returned to action in the LV= Cup a fortnight ago and now wants to lift Bath up the Premiership table.

"We are not under any sort of illusion that eighth is good enough," Webber told BBC Radio Bristol. "We want to be competing at the top-end of the table.

"I'm looking forward to getting out there on a Saturday at The Rec."

He added: "If you're injured it's a bit like turning up at work and not being able to do your job, so it's great to finally be able to contribute."

Webber was a Wasps player when he tore a muscle while playing for England in last year's Six Nations.

The 26-year-old moved to Bath over the summer, but ongoing shoulder problems kept him on the sidelines until 26 January, when he made his Bath debut in the LV= Cup win over Exeter.

"I'm sure it will be a step up from the LV= games but that's the reason people come to this club - to play at The Rec on those days - so I'm really looking forward to it," Webber continued.

"I know I've got a long way to go to get back to the standard that the club expect of me and I expect of myself. I've got work to do, and as a team we've got a bit of work to do as well.

"We are in a positive place at the minute. We got some good wins under our belts recently and scored a lot of tries.

"We are in a semi-final and a quarter-final, and are chomping at the bit to get better in the league."