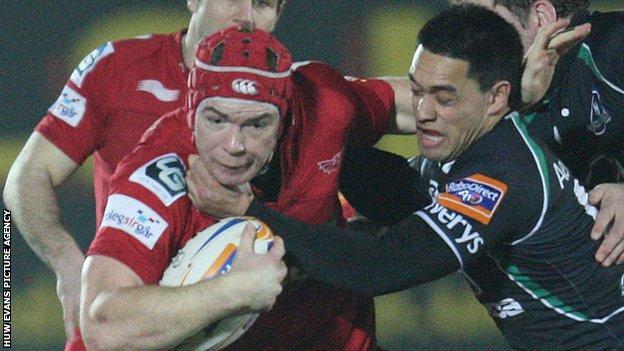 The Scarlets put themselves back into the Pro12 top four play-off places with this victory over Connacht.

Lock Joe Snyman Number scored the Scarlets only try - his first try for the region - at Parc Y Scarlets.

Young fly-half Owen Williams kicked all 20 points on offer to him, including six penalties and a conversion, to give the Welsh side a vital victory.

The Scarlets, who last lost to Connacht in Wales back in 2004, were desperate to get their Pro12 campaign back in the road.

The Welsh side ended a five game losing run with their 40-19 LV Cup win over Leicester Tigers last Sunday - their first home win since mid-November.

Fly-half Williams, 20, kicked four first-half penalties to give the home side a 12-8 lead at the break after wing Poolman has scored the game's first try in the right corner after he latched on to a cross kick after only 29 seconds for Connacht.

Dan Parks, the former Blues fly-half, who is now a player-coach with Connacht, had a mixed evening with the boot but did land a drop goal for the visitors just before half-time.

Murphy then scored the Scarlets only try after half-time to stretch the Welsh side's lead, but it was fly-half Williams' boot that kept the home side ahead.

Replacement prop Loughney managed a consolation try for Connacht, who had outscored the Welsh side by two tries to one, but only after Williams had provided an impressive 17-point cushion for the Scarlets.

This was Connacht's sixth defeat in all competitions since they beat Zebre 19-10 in Parma in the European Cup on 13 October.