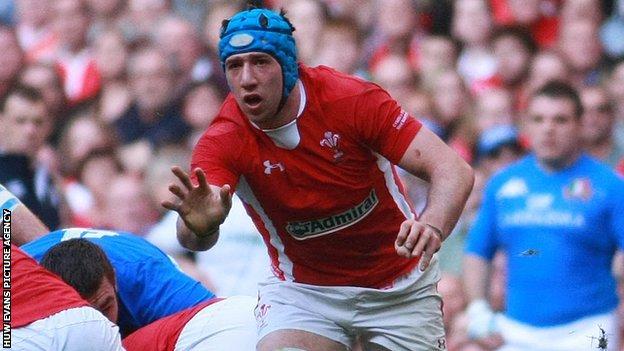 Justin Tipuric will take over from injured skipper Sam Warburton as Wales open-side flanker against France in Saturday's Six Nations match in Paris.

Ryan Jones returns from a thumb injury at blind-side to captain Wales for a record 30th time with Warburton (shoulder) out of the match-day squad.

Hooker Richard Hibbard replaces Matthew Rees in a third change to the side that lost to Ireland last Saturday.

Gethin Jenkins retains the loose-head prop role with Paul James on the bench.

Aaron Shingler, who started at blind-side against the Irish before being forced off injured early in the second half, drops to the replacements.

Wales' back division is unchanged despite criticism of their misfiring performance against Ireland.

Interim Wales coach Rob Howley said: "It's disappointing to have Sam ruled out, but Ryan comes in as captain with a wealth of experience."

Howley said he would have selected Warburton, who suffered a "stinger" (nerve damage) to his shoulder against Ireland which proved to be worse than it first appeared, in the starting 15 had he been fit.

"With the nature of bumps, sometimes they don't show up till 24-48 hours post-game. He [Warburton] hasn't trained at the beginning of the week and Ryan didn't train on Tuesday either with a bit of sickness and diarrhoea but thankfully he's rocked up this morning and we're looking forward to what is a huge challenge," added the former scrum-half, who enjoyed two notable wins in Paris during his own playing career.

Ospreys back-rower Jones, 31, will win his 71st cap at the Stade de France.

The 23-year-old, 11-times capped Osprey made his Wales debut against Argentina in 2011.

He went on to make three Six Nations appearances in 2012, coming off the bench in the win over Ireland in Dublin as injured Warburton's replacement.

Tipuric then started for the wins over Italy and Scotland as Wales continued their Grand Slam campaign.

Hibbard, 29 and with 19 caps - 11 of them as a replacement - is fit again after a shoulder injury to take over at hooker.

The Osprey's recall sees captain Rees drop out of the match squad altogether as Scarlet Ken Owens continues on the bench.

But with Jenkins having played a key role in Wales' three Grand Slams in the past eight years, Howley has stuck with the former Cardiff Blues prop for the trip to Paris.

Bayonne's Mike Phillips is the other France-based player in the Wales starting line-up while fly-half James Hook, of Perpignan, is on the bench.

Wales' defensive tactics have been debated since Ireland raced to a 30-3 lead in 44 minutes last Saturday.

France are also hoping to bounce back following their shock 23-18 defeat by Italy in Rome on Sunday with centre centre amid two changes.