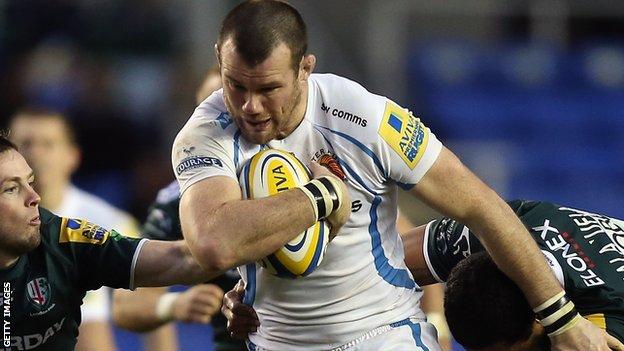 Exeter captain Tom Hayes says his side must be wary of the threat bottom-of-the-table Sale will pose.

Sale have after successive wins over Wasps and Scarlets after losing four of their previous five games.

"Their form lately has contradicted the position they're in at the minute," Hayes told BBC South West Sport.

"They've showed a bit of form lately and lot more cohesion in the way they play," Hayes added.

While many clubs have put out weakened sides in the LV= Cup, Sale opted to pick a strong side with the likes of Danny Cipriani and Dwayne Peel taking the field for the 33-30 win at Wasps.

"They've used it as a chance to nail down what they want to do as a team and they'll be a lot stronger for it," Hayes said.

"That's something we're going to have to counteract this weekend and I think we'll really want to go flat out from the start of this block of games now."

Exeter themselves have been on a poor run of results lately, with their first victory in seven games in all competitions.

"The Premiership table shows how crucial a block of games it could be," continued Hayes, whose side also face Saracens, London Welsh and Harlequins before a two-week mid-March break.

"We're only five points above ninth place and six points off fourth place.

"We're stuck right in the middle where we could end up going either way.

"We haven't said we need to get into position x, y or z for our season to be a success, but we are driving forward."