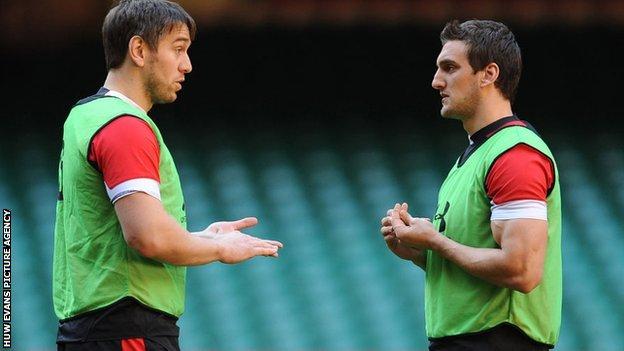 Ryan Jones believes the best is yet to come from under-fire Sam Warburton.

Jones leads Wales against France on Saturday in the absence of the Blues flanker Warburton, who misses the game with a shoulder injury.

Warburton has gone seven games without a win as captain but has been backed by Jones to deal with mounting pressure and emerge "better for it".

"I think we've yet to see the best of Sam," said Jones. "I think you'd be a brave man to write him off just yet."

Warburton has captained Wales on 20 occasions since Matthew Rees relinquished the role through injury in June 2011.

After leading Wales to the semi-final of the World Cup in New Zealand and the 2012 Six Nations Grand Slam, Warburton was installed among the bookies' favourites for the captaincy of the British and Irish Lions in Australia next summer.

However, a disastrous run of eight consecutive Test defeats for Wales and an apparent loss of his own form have seen pressure mounting on the 24-year-old.

That has been exacerbated by the emergence of Ospreys open-side Justin Tipuric as a genuine rival for the Wales number seven shirt.

However Jones, who missed the 22-30 loss against Ireland with a thumb injury, believes Warburton has the personality to deal with the set-backs and emerge stronger.

"I sat down with Sam on Monday and chatted about a few things regarding the game decisions and stuff, but you know he's more than a competent captain and he's a great bloke as well," said Jones, a triple Grand Slam winner.

"It's not a position that you leave at the training field when you go home. It's a tag that stays with you 24 hours a day, seven days a week.

"But Sam has been a wonderful ambassador and a great leader for this team.

"He's come under a bit of pressure the last few weeks, but the measure of Sam as a man and as a captain will be how he comes out the other side of it.

"Unfortunately he's not able to play this weekend which again is an opportunity to alleviate that pressure, but Sam will certainly come out the other side better for it."

Listen to the full Ryan Jones interview on the Back Page on Radio Wales at 08:30 GMT, Saturday, 9 February.